This topic lists all the released updates for No Man’s Sky Frontiers in the top post.
Discussion is welcome of course, like we have done with Beyond and Origins/Next Generation 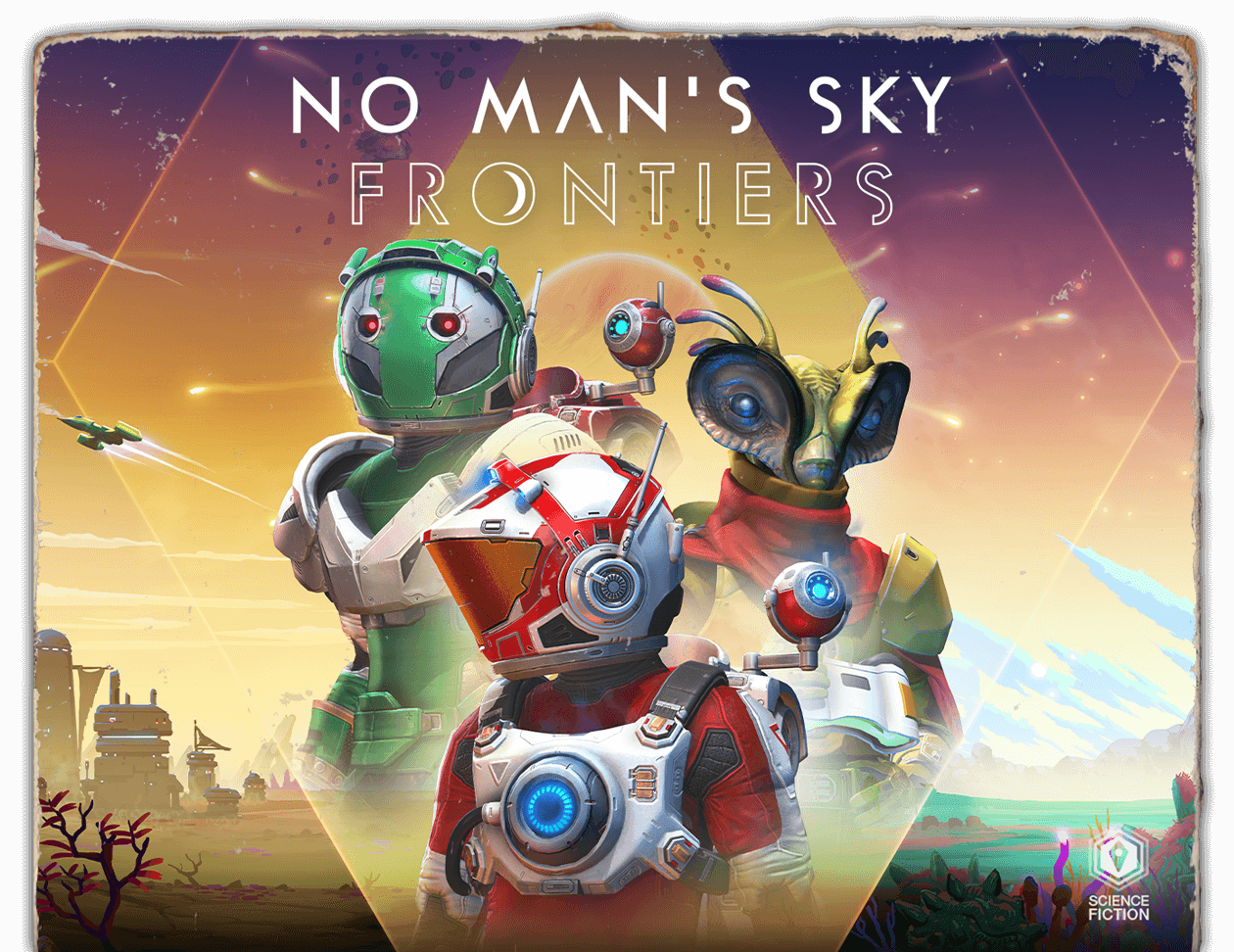 Frontiers: Introducing Update 3.6 Become Overseer of your very own procedurally generated alien settlement in update 3.6, FRONTIERS. Make choices, guide your citizens, develop new structures and defend your people from the Sentinels. Or, take...

Hello everyone, Thank you to everyone playing the Endurance Update, especially those taking the time to report any issues they encounter via Zendesk or console crash reporting. We are listening closely to your feedback, and have identified and...

You can find the bug fixes in the reply here

Hello Everyone,   It’s been so lovely to see the community co-operating on the Polestar expedition, with players meeting up to visit each others’ freighters, and veterans stepping forward to lend a helping hand to those trying an expedition for...

Topic for posting and discussing Steam 3xperimental updates or patches for NMS Frontiers. The previous topics can be found here: NMS Origins NMS Beyond

Want to keep an eye on updates, history, and more, check SteamDB

Similar to the above, GoGDB

You can of course also post any issues or bugs you come across in:
#nms-frontiers:nms-frontiers-bugs-issues
These are however most likely not being read by HG.

Lookie at what appeared in Steam. Hooray! NMS cards! 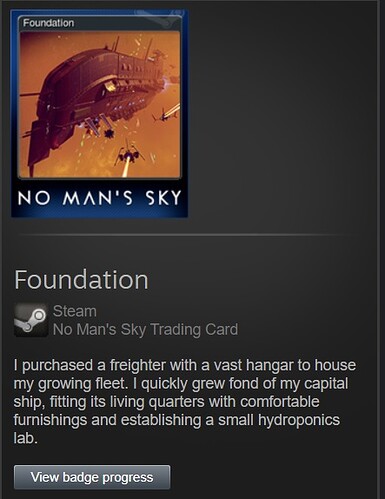 Playing No Man’s Sky on Steam will now earn trading card drops , with a total of 15 cards available. 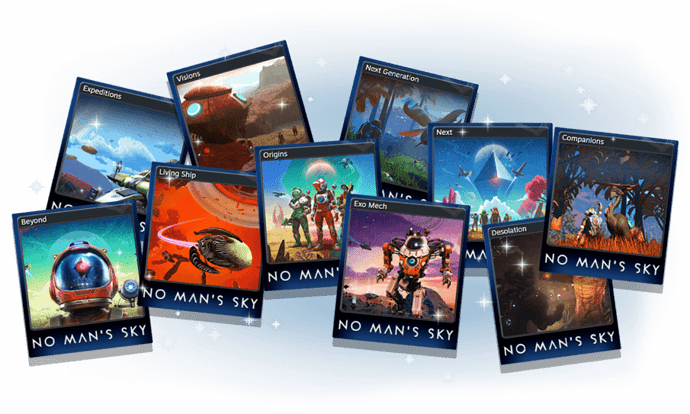 Collect trading cards to craft badges , and earn emoticons and backgrounds for your Steam profile.

Here is the one I got currently, not sure when I got it, but I guess only just: 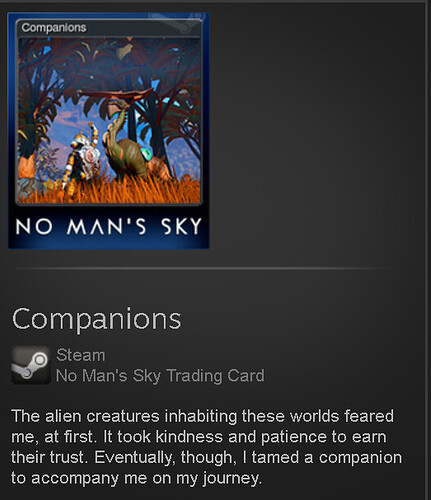 Of all the notes about Frontiers, one I like the most is “We’re excited for what it allows us to do in the future.”

Annnnd … Bob the Builder gets his SimSettlement gameplay.

The funniest part of the info? VyKeen composing a poem!

There once was a warrior keen,
who ate all his meat very lean.
He drew forth his dirk
and oh my dear Hirk …
His prey was not long for the scene!

767 Mb patch, updating right now. This must be some sort of record.

So the eyes referred to the settlement overSEEr? I give up guessing Sean‘s thoughts.

But settlements and new base parts are definitely better than a mirror universe (or what else we guessed), that was a nice surprise.

Of all the notes about Frontiers, one I like the most is “We’re excited for what it allows us to do in the future.”

That hit me right in the pleasure center too. I’m really looking forward to the upcoming year in my adopted home universe.

You know these people who say, “oh, you took programming classes and you like gaming? You should become a game developer! Wouldn’t that be fun!” Then I always think of HG (and other companies)'s release schedules

and slink away and hide behind my slightly more boring job.

By now I have 6 Steam Trading Cards total. Keep getting new unique ones as long as I play. At this rate I should have them all soon enough

I wondered what the trigger for a card is. Just play time? Just in Normal mode or higher?

It seems to be rewarding us for things we did long ago. Playing catch-up. I got the card for owning a freighter, getting a living ship, etc…Every time I shut the game down, I get a new card

I got eight cards in a row on the first day I played after the update came out (including one duplicate). You automatically get about half a set of the lowest level for a particular game for nothing but playing it for a while (Random Drops).

Then Steam will show you that you could “easily complete the set to reach the first level”, simply by “trading cards on the market”. “Reaching a level” means that you get a wallpaper image for your Steam user profile and NMS emoticons for steam chat. Nothing of IRL worth, just a means to display your fandom.

There are maaany rules how you can produce cards out of thin air, or get rid of unwanted ones, or turn them into another currency with which you can gamble again to get more random ones… If you are a completionist it might entice you to spend real money from your steam wallet to buy missing items off someone else…

My experience is based on my completion of the first level for Space Engineers. I never used real money from my Steam wallet, I merely sold duplicate drops and earned, literally, pennies, with which I bought the missing cards which also only cost pennies. (SE is an exception, it is suffering from massive inflation because it continuously drops Steam-tradable objects as exploration rewards in game while you play, in little boxes with parachutes, it’s very cute, space helmets and tools etc.)

So, for SE it was easy to complete one level of card trading without spending any money, with No Man’s Sky, I don’t know whether I want to do that again.

Here is what you can gain for completing levels: 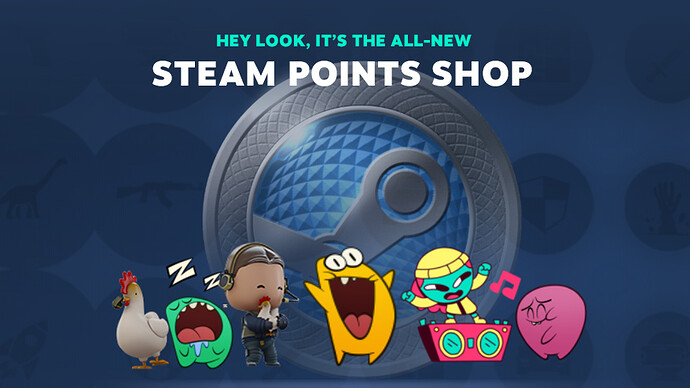 Get points for shopping on Steam or by contributing to the Steam Community. Use your points to customize your Steam presence or award fellow members of the community.