Still no fix on those having trouble with a pre 1.2 and/or pre-1,3 save not being able to attain glyphs, see fourth race NPCs in the wild or find traveller graves?

I don’t see it mentioned but fingers crossed it does.

I’ll have a wander around later and see if I can’t find any glyphs.

looks good, lots of variable they are addressing.
but it doesn’t appear to address a rare save issue that breaks your game save, you can lose all your inventory (apart from tech), and also prevents further saves, reloading previous save will not even fix. I had to cold boot the ps4 before it even started saving again, it was like groundhog day in space for a while.

Thank you for posting this.

I was hoping that they would improve shop/ mission dialog to be more streamlined (instead of revisiting each panel again when attempting to choose futrher options). However, it is great that HG has fixed so many bugs so promptly.

NADA will be happy now!!! lol

Thank you for posting this @know-nuffin …wooo excited to log in later tonight! I know what you mean on the last armourer mission it took me a while and can honestly say no matter win or lose, I never enjoy forced fighting/killing - not for any mission - but got there in the end, carrying 2000 iron for deflector shield repairs throughout each time (died twice) but did eventually manage to take out the three ships necessary to progress. Keeping that shield up is key but my god, I struggle, haha.

The only thing that could improve NMS ten fold would be the addition of Bill Murray. A whole race of Bill Murrays! You could have you Bob Wileys, and your peter venkmans and -
*** rushes to write fan fiction the world doesnt want but NEEDS! ***

Lure them down to low atmos, get far away from that sentinel fleet ship, pick them off there, you can get around behind enemies really easily using the environment on a planet and they actually have a much harder time losing your tail and getting the spin around on you.

I find it’s also very easy to tail them when theres a lot of asteroids around should you be in spaaaaaaaaaace!

I shall load up with iron, wipe the tears from my eyes… erm, I mean wipe the sweat from my brow and try again - low orbit pursuit sounds like a plan

don’t have to get all 3 at once,
shoot a freighter to get 1 star, shoot down the cop, fly away to lose star
rinse repeat

The team at Hello Games have been busy, good work guys!

Have they addressed the issue where beacons/geobays from pre 1.3 files will spawn under the terrain? I have a normal mode save from last year and my colossus geobay is under the terrain. I dug down as far as possible and the icon is below the planet geometry. I can’t even select it to delete it.

Still no fix on those having trouble with a pre 1.2 and/or pre-1,3 save not being able to attain glyphs, see fourth race NPCs in the wild or find traveller graves?

If it’s on PS4 as on PC, the 1.33 change nothing, i’m still unable to find graves by scanning. The only way is to be lucky enough and meet a traveller in a space station or trade outpost on a planet (always keep 100 nanites in case…). And sometimes it doesn’t work well. I met 3 travellers so 3 graves but i have only 2 glyphes (maybe the 3rd one gave me a glyph i already had, dunno). But i know that some people can’t see the marker even after having paid the traveller so the bug seems to be able to have different form.

I haven’t found one. I didn’t know getting one from a traveler was a option, thanks.

i’m not getting the option: no soon as i hit outer space the large sentinel vessel warps in and the 3 pairs of fighter come at me - i must have upset them on GTA 5 or something

are you pissing off sentinels on a planet and then going to space or something?

Well, seems like there are some text issues with the new update, or the Korvax turned themselves into Gek for some dark reason: 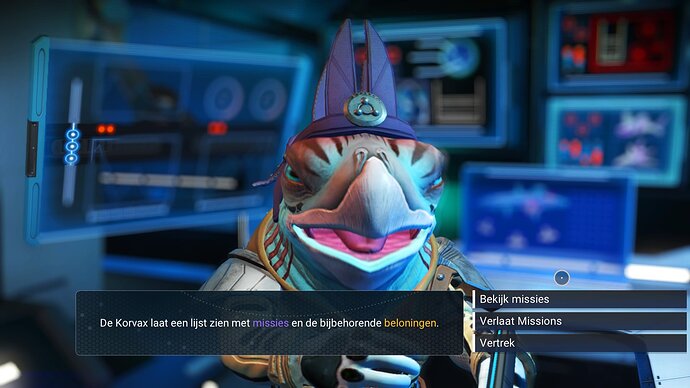 i’ll get them eventually