Confessions of a Traveller

Hello everybody and welcome to the first/neverending meeting of Travellers Tranonymous (our PR department assures us this is a hip name that flows better off the tongue).

This is a safe haven created for travellers whose guilty actions have become too much of a burden to carry by themselves.

Be your teeth full of another’s flesh or your exo suit caked in blood, you can talk openly here without fear or judgement.

So without further delay, I’ll get the ball rolling.

Sometimes I’ve killed innocent creatures in cold blood. I’ve killed these innocent creatures for no damn good reason other than they wouldn’t sit long enough for me to scan them properly… Their screams echo in my dreams and for what? Another 100,000 units for a creature scan? I strive to be more patient and a better traveller but I know I won’t. I will kill you if you scutter around too much.

So, floor’s open. Get confessing. Free yourself.

Its been forever since my last confession.

Last session I drove my exocraft over lots of rock pillars with the intention of harvesting the easily accessed marrowbulbs.
I then just procedded to hoon about and left a wake of distruction behind me and never actually harvested anything. For this I am ashamed.

Bless me Atlas for I have sinned it has been a year since my last confession.
I have been impure in both thought and deed.

I hire and fire my employee’s based solely on their names.
I paid way too much attention to Artemis.
I sat in a bunker on an extreme sentinel planet for the achievement.
and i regularly shoot any insects i find on a planet for target practice.

Almighty Atlas.
Indeed I have to confess something.

I killed a snappie.

Amen! I have tried to eradicate the things. They are my preferred source of Carbon…wait…this is a confessional…nah. I’ve taken hundreds without remorse. I will probably be whipped eternally by a horde of Snappies.

There has been something I’ve done recently that I can never forgive myself for.
One day, while crafting warp cells, I ran out of Thamium9. I could have just shot a few asteroids, but right then a freighter jumped out of warp…
filled with Thamium9
Being lazy, I decided to shoot down the freighter, killing off all the Sentinels that attacked me in my pirate ways.
My own laziness has resulted in a massacre.

The 1st planet I discovered with bipedal-teddy bear -Gek like creatures, I slaughtered many of the males, which I named Kenny . I named the females “Not Kenny”. Then I named the planet “Kill Kenny”, to encourage other travellers to do likewise.

Killing creatures can be very useful if you happen to need Zinc fast to keep you going…sentinels can be annoyingly scarce when you need them most so shooting a creature or two tends to bring some in…problem solved.

Not a lot I feel bad about in the game…I had a coupe of noob deaths back in the early days…one of them was because I got overconfident on a extreme hazard planet…got too far from the ship to mine(ts the time there was no calling the ship to you) and then a storm hit and I was like “nah I’m fine”(famous last words), and then I ran into a small pack of bad critters so they bit me pretty bad and I started running back towards the ship with them in tow, and my hazard protection was running low but I couldn’t stop to replenish it(no quickmenu existed back then) because the critters would eat my face off and just as I was about to get to the ship(maybe 15 feet from it) I died from fall damage as I jumped down from a small hill.

I’ll admit to smiling and also sometimes laughing when a recently ran over mid-size creature gets lodged into the bull-bars of my Roamer and starts flapping around comically.

Forgive me Atlas for i have sinned. It has been never since my last confession.

I accidentally fired upon a friendly ship during a freighter assault and ended up killing everyone. Sentinels, friendlies and pirates.

My misfire has caused the death of many.

This one time, at NMS camp, i fought to save a freighter, as single shot hit the freighter and the sentinels were no me for about half an hour. NMS camp can be brutal lol.

Last month, I happened upon a mega-freighter under attack by a ton of pirates while exploring. I proceeded to shoot down all of them and happily landed in the freighter to see if I might get an upgrade from my previous freighter.

Since I had spent so much exertion rescuing the freighter only to be rewarded by shoddy stats, I angrily took off and attacked the freighter and looted it.

I can still hear their frenzied calls for help.

It’s been two weeks since my last confession.

Today my confession is one of embarrassment and shame. I have been playing no mans sky since launch (longer if you count my dreams) and was very happy with the upload all discoveries button for planets and systems, I felt they missed the mark by not having one for fauna and flora…

I only discovered this today… When you hover on the tab… 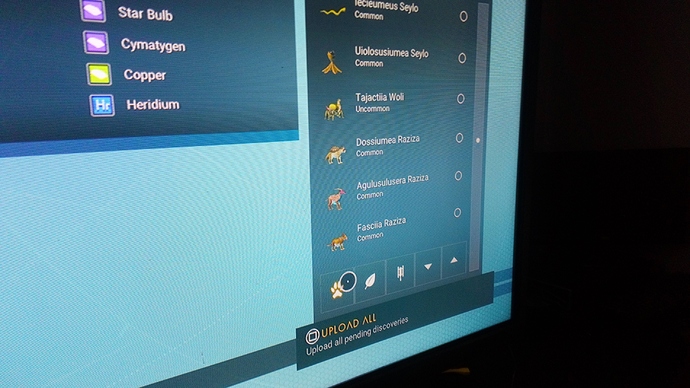 DONT LOOK AT ME

I like to be the 10th like on post , because I know they get a badge for it. just went through “picture through Windows” topic and gave a few out.

Once I got a new weapon for my spaceship and I was testing it out on some asteroids. I accidentally hit a random spaceship and then the spaceship tried to blow me up. We got in a fight and I had to destroy him…

I take time not to run over the friendly animals, not so bothered for those that attack me.

The other day I ran over a small infant type animal by mistake, I was in the roamer. I stopped a little further on, got out and went back on foot, only to find a fully grown animal, perhaps a parent, standing and moaning over the body. Perhaps not intended in the game, but still…

Bless me Atlas, it’s been many sols since my last confession.
Since NEXT arrived, scanning bird-things can be infuriating and I recently lost my temper…!
Please don’t tell the Galactic Avian Organisation. I made sure I ate the whole thing. 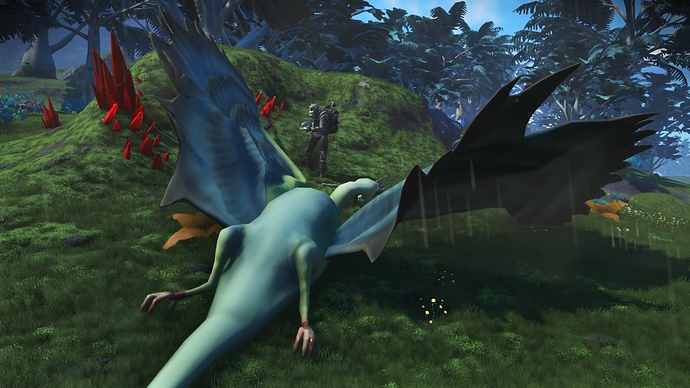 “I ate the bones!” KFC commercial still in my head.

Yesterday, I excitedly jumped into NMS hyped about the exocraft modifications.
I couldn’t find them.
Only now do I realize that all I had to do was access the terminal, after spending a ton of time trying to figure out where to customize exocraft.

9 Likes
next page →
All rights reserved by Atlas