Wow, that really does look too structured to be a coincidence! At first glance they looked like capital letters to me too, but the more I look the less letter-like they seem.

Definitely worth more investigation, though.

I thought at first that I saw some letters (O, A, U etc), but it’s more like circles repeated and chopped up. Repeats in the time domain would just be due to the echoes. However, repeats in the frequency domain are unusual.

I know of no acoustic phenomena that would produce regular structures that repeat identically in several frequency bands, especially since each repeat also shows some symmetry. I can’t think of any normal synthesis techniques that would do that, either: it looks like something that’s deliberately constructed in a spectrogram, rather than something that’s intended primarily as sound.

MacForADay: do you know whether the frequency scale is linear or logarithmic? If it’s logarithmic, and each repeat is an octave, then it might seem more acoustically reasonable, though still very unusual. If it’s linear, then it’s even less likely to have originated as sound.

I’m not the one to ask; I have 0 audio experience. I was just passing on this post from Reddit.

Those garbled sounds in all the CEO videos contain that sort of spectral imagery when I view it in linear mode. I don’t know how to clean up the symbols better because the garbled symbols overlap with her voice. I first thought they were roman numerals, but I can see an E kinda. ¯_(ツ)_/¯

Thanks for that. I’m pretty sure there’s something going on, especially since patterns in linear frequency mode would be extremely unlikely to happen naturally. It’s pretty hard to read, though!

It certainly looks deliberate. I wonder if stretching out that portion of audio would make it more readable; whatever is there looks squished. I also wonder how the spectrogram would differ when looking at the combined audio of all four videos.

To me it looks like rolls of celluloid film going through a wash and/or colour process. Reminds me of my dark room days

Aside from what it reminds me of visually, I’ve no idea what might be hidden within.

i played around with a few of the videos individually, and it almost looks like a timer/clock? maybe layer a few videos correctly and we will get a better look. Maybe a release date? lol. Other than that, no idea.

I feel like it will just be a mess of waveforms, but then you suggest the possibility of a release date! Who’s on this!!?? Let’s go!! lol

Excuse me sir, harmonics, does it sound a bell ? (No pun intended haha) Just any natural sound is repeated in the frequency spectrum with the pattern 2/1 3/2 4/3 5/4 6/5 5/3 8/5 (octave, quint, quart, third major, third minor, sixth major, sixth minor), that how acoustic work. In fact any sound that doesn’t have harmonic sound fake, dull, muffled. The spacing between each harmonic is what you differentiate a piano to a guitar. And as in general sound produce more flat tone, synthesis is able to generate cool sound that look as cool in spectrogram.

For me I see nothing else than a synth in the background with some effect on it and much echos. The images you can see is taken in izotope RX, that one of my main tools at work that I use regularly.

You can see some spectro here, take a look on the guitar one. As it bend pitch you can see that you can produce form and now imagine that another guitar would do the pitch inverse to that and tadam, an O, or C or…

Please don’t think that I’m mean or anything, just want to put it straight that it’s normal to see familiar things in things we don’t use to, the brain is setup to try to match pattern. 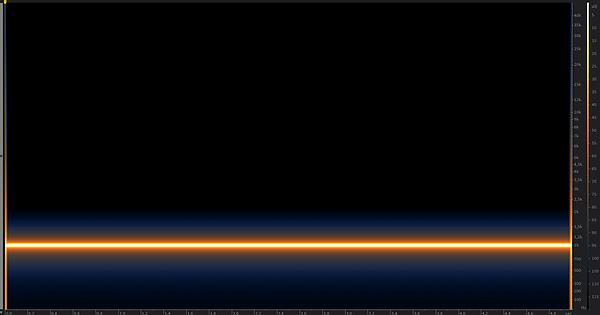 Your example images do not resemble the uniform symbols at all unfortunately.

There is no music as such, just voice and noise. It could have something hidden, much like found in the other audio samples in this ARG, or it could be just arbitrary noise added and pasted to mimic glitchy sound fx. ¯_(ツ)_/¯

Tom pointed out that the repeat in frequency domain was unusual. My point was to demonstrate that it was the opposite, an absence of frequency repeat (harmonics) is unusual as it show that it has been audio manipulation and/or synthesis to create such effect. After the repeat in the time domain is as Tom pointed out too, a mark of the echos, which can mean something, like why they use such effect. But I don’t thing there is any hidden picture/symbol in the spectrogram. You can see so much things, or thinking recognize some pattern as it would be anything else as luck and/or pareidolia. I could be wrong and I would admit it without any problem, but as I said, I’m use to look a spectrogram, I can recognize speech in on the spot without listen to it first and some pattern too. What I see there is a synth that, funny enough look like letters.

These patterns are not voice, as you can distinguish the voice easily like you say.
So, I agree it is some sort of synth and a synth can be anything.
Please import the video audio into your program and use your expertise to clean up the spec for us.

I’ve done it, before I saw this post. I’m working on cleaning any audio bit to try understand some of the underlying dialogue, without much success I must say right now, beside “Deuxième programme” which is french for “second program”. But is it my imagination ?.. I don’t know. The audio is on the all the videos… (an example is on the video 1 at 17s)

Haha… well didn’t see that coming. I was thinking that the image was just the last part of the video, and when I look it up I realize that it was the whole video. (That is why you have to screenshot the timecode with the spectrogram :p) So it appear in fact that the pattern you see is the voice, and why my “expert skill to recognize speech” (sigh… XD) didn’t tell me it was speech was simply because it is so much bit crunched (it’s a effect in which you resample the audio on less bit.

So here the audio with only selected the upper part, so only the “pattern”.

Here the spectrogram of what you listen to:

Here the part they say “If you can see this video” with much effect and noise:

And only the upper part:

See how the pattern is finally only speech with effects on.

And bonus here’s a lion beside a tree in a music from Xenakis, Voyage Absolu (it’s ok to not know what it is, you don’t miss that much ahah). Made in 1989. So not on computer, but on tape. 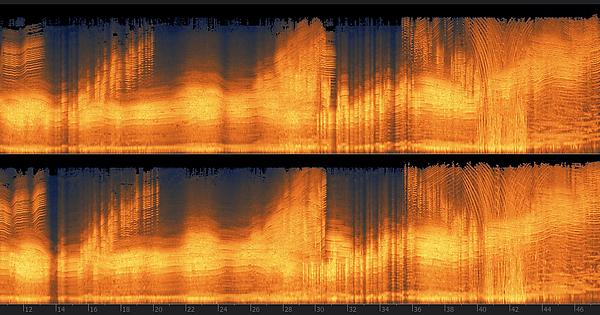 Thanks for those images.
24-26sec looks the least bit crunched, and sorta shows me how the background crunch noise is imposed over her clean voice in other areas more heavily. It’s all been super processed and mixed and repeated, and then the last 15sec is echoed to make things more complicated. The previous 3 videos of her are only 30sec long.
I’m grateful for you taking the time to look at these vids, every bit helps.

Hats off to you @Shark4 . As a musician who forever struggles to understand the science of sound (just listen to my horrible attempts mastering on soundcloud/andrewspgaynor if you dare) with regard to engineering and mastering, I am always blown away by the knowledge from folk such as yourselves, thanks for lending yours to us, you were in no way mean just informative, though it is hard to shake that feeling of being mean when you are just informing folk about things and such

I think its one of the side effects of humility