I long ago stopped doing the quicksilver missions due to their length and level of exasperation (for me). But with the recent options changes I decided to go ahead and try a few.

After that another twenty minutes of the same, checking constantly with thee scanner, I finally got to the Traveller’s Grave where the main quest started (destroy eleven aggressive plants). The completion of the actual mission took me less than five minutes in spite of the steep slopes and the storms.

The next qs mission was easy by comparison and I was quite enjoying it.(procure twelve or thirteen Ancient Bones). I had nine and the scanner picked up a mad burial site with at least six graves.

Unfortunately they were located inside the pure bedrock of a huge volcano that I crawled over, around, and even tried to burrow under to get at my prizes, to no avail. I was actually relieved when suddenly the game froze, and though I left it for awhile hoping it would recover, I eventually had to restart the game, finding myself once again at the Anomaly, having lost the mission.

The fourth qs mission I took from the Nexus was to procure about 800+ Cadmium. I took the mission, headed immediately for my ship, but before I was five paces away I got this message: 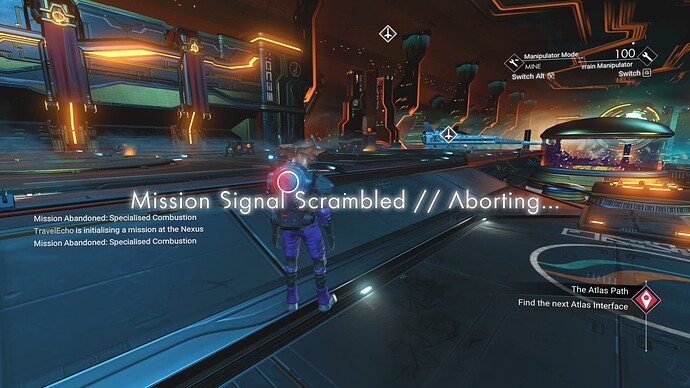 I tried a couple more times but it kept aborting. So I gave up and logged out for the day. I am thankful I had at least one good experience with those missions. (sigh) And I even somewhat enjoyed the others --mostly because I wasn’t in a hurry for a change and therefore getting frustrated because I had limited playtime.

One of the funniest things was that the first planet I’d got sent to was called “4.0 Killed NMS!”. A contradiction, since the perpetrator seemed to manage to play it long enough to name a planet. lol

I hope you all found those adventures of mine amusing, as in retrospect, do I.

And here I was frustrated that geodes we’re not stacking properly. I’m appropriately chagrined.

@TravelEcho : I have edited the topic category.

Thank you! I was going to ask and then I forgot.

So my next four Nexus qs missions went like this:

I made a quick trip back to the Nexus via a save and a reload that got rid of that quest from my Log. But I was too tired to continue with another qs mission, though I think I still have one more to do.

Do my fellow travellers have any fun stories like these to add to this thread? I can’t be the only one… Can I?

7 Likes
All rights reserved by Atlas