Wouldn’t adding another planet increase the 18 quintillion to an even higher number?

Like @jedidia said, that number is based on the 64-bit maximum. However, that’s even just a theoretically possible maximum. The actual number of planets created is significantly less. Not all possible regions are used, there are normally-inaccessible “haze zones” around the galaxy center & edges. Not all possible stars are spawned, there’s a lot of skipped entries in the list. And not all possible planets are spawned in every system. So there’s plenty of room for just adding more. HG’s procedural formulas might still make that prohibitive though, if adding more in somewhere would have a destructive trickle-down effect anyway.

Maybe there is a way around this; where planets with (uploaded) bases are exempt from the changes that occur across the universe in a reset.

I’ve long been an advocate for something along these lines. The main argument I hear against this is that developers strongly try to avoid the complications/workload of maintaining multiple iterations of their products. Yes that’s typically true and understandable, but from what I’ve seen from modding, NMS has the unique flexible structures in-place to handle this relatively easily. For instance, when they added the newer “HQ” barren & frozen biomes they didn’t remove the old ones, they included them as alternative procedural choices. They could certainly force specific choices for uploaded base-planets (or even whole discovered systems which might be easier and more consistent).

while I agree I hate total planet shifts…mainly because it screws up planet naming…in general I’m okay with it. Because if it leads to all new environments, and better quality / more diverse…it’s worth it to me. The one thing I would like to see them add is backup your bases…with materials, so they can be moved to new planets /positions when these types of changes occur.

Maybe they can implement the ability to rename things. I for one would like to rename planets and creatures.

Depending on the base build, and if they altered any base parts, things may not always appear exactly as before. — And therefore, the bases that were built on flat ground will fair best. — Of course, we do not yet know if they may have further refined this process.

I keep having to remind people it’s no longer even just bases anymore. It’s now also elaborate, sprawling power and pipe lines to terrain-dependent hotspots. AR->Next was easy, tiny flat base plots could only be restored to tiny flat base plots. I mean I would like similar new base-building features like multi-item select, move, copy/cut/paste, etc. But the current situation is no longer comparable.

I’m sure bases are the stickler that has made HG extremely wary about another reset. They’ve repeatedly mentioned seeing the data on how popular base-building became. Despite how passionate advocates for a reset are, NMS’s launch has likely made HG terrified by the possibility of an incoming shitstorm from the big base-building fans. That’s why I keep advocating for a reasonable solution that would preserve the current systems, while giving us that much-needed reset (restoring much more variety) on undiscovered systems.

Maybe there is a way around this; where planets with (uploaded) bases are exempt from the changes that occur across the universe in a reset.

The problem you have now is that the result of the procedural generator is depending on the availability of online data… If a player has no connection, they’ll end up wit a completely different planet in tat place.

Is PS network down for maint.?

Ahh, but it’s not. They have the entire giant database. They can exact this single small piece of data from the database and include it in the game. As far as the procedural generation, it’s not important for the local game to know anything specific about a base or system like who discovered it, only that it has been discovered in a specific version so the game should use that generation.

They can exact this single small piece of data from the database and include it in the game.

And now you’ll have issues with data consistency… things like that are just not practical from a developers point of view. Rather make a clean cut rather than hauling a lot of bug-prone systems along.

PSN is still up for me.

I’ve always thought that the “space whale” painting looked more like a “Sky Whale” since it appears to be in the atmosphere.

It would be great if the Space Encounters tied more into lore.

Well its been 3 hours since his last orange tweet, so that’s likely it for today.

Orange getting annoying much…

I just realised that, in the U.S., its no longer summer as of today. So this would be a Fall update now. Lol.

The new photo is very revealing! That plant/snake thing is a whale? Or something? 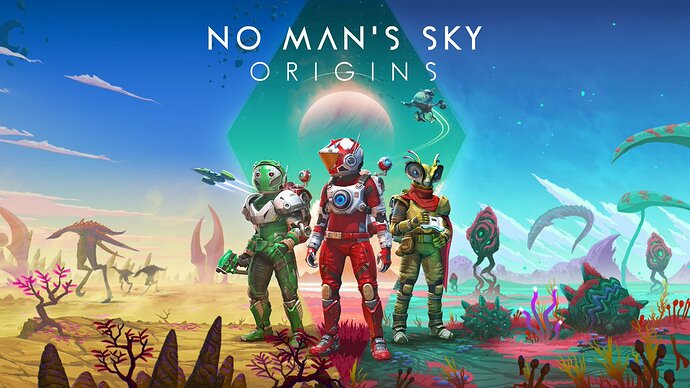 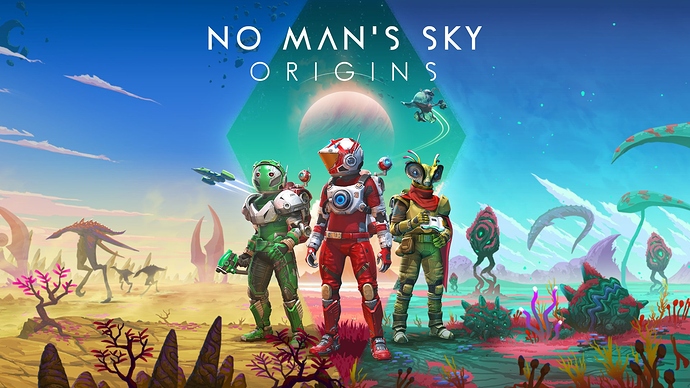 Under the letter “O” you can see what that debris is better in this one compared to the other(the lettering is in a different position) and it appears to be the “grave of the ocean king” skull. Also, on the left, there is more claw looking structures coming from the ground. On the right. It seems to be a water biome? Those look like clams on the ground above water and big leaves over the water. 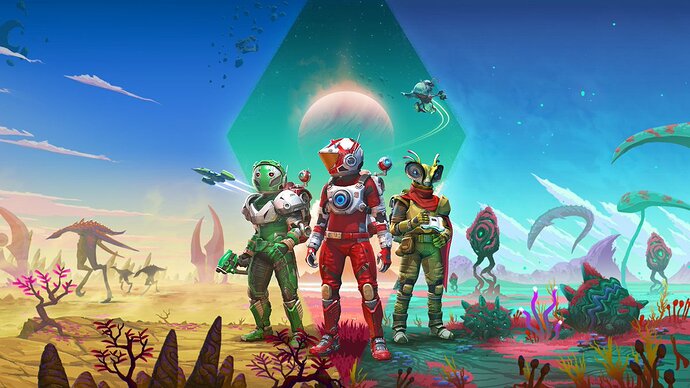 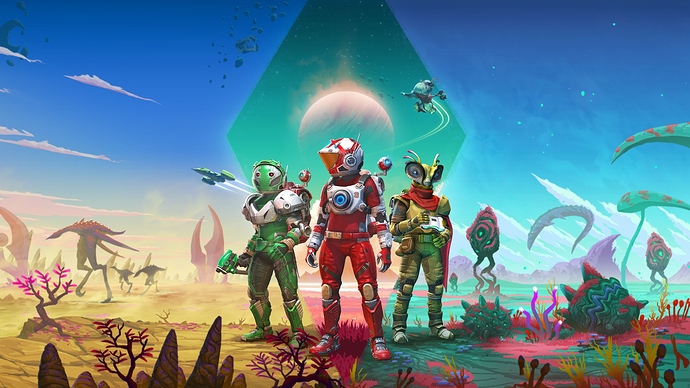 He replied in his own comment section with the same photo but without the logo! It is the ocean king!

Definitely the huge skull that can be found in space to the left of the planet and an asteroid with a piece blown out of it to the far left.
Also the flying snake, dragon thingy is much larger than any of the strange flying creatures we currently have.
And, note that the Atlas continues to inch closer to us in each cover art where it is depicted.

New Internal on Steam. They must still be tweaking.