I’m sort of near the hub but haven’t been base hopping there for a long time.

I’m on the same boat to be honest

I am taking the long way there to the Star Chain on PC. Aprox 60 more jumps. As little time I get to play, about 2 weeks I should finally arrive.

Same. I’m taking my time though and taking pictures.

Ta da! I have a Creative Mode base there at least for the time being! Mr Noodle’s holiday retreat is there in Etarcia ECSD on planet Polyphemouse… oops sorry! @Polyphemus ’ planet named - Mr Noodles ECSD.

Anyone can easily visit in Creative Mode and the base titled ‘Mr Noodle’s Playground’ - mouse wheel, is also in the Steam workshop on PC. I have no idea if a workshop item on Steam PC is downloadable to PS4? I would have built the thing in Normal Mode but in Normal Mode I am deep in an outer galaxy, so until I return… Still, it is easier to visit in Creative Mode or via the workshop.

Created in homage to the mouse in the Waking Titan ARG and Frankie & Benjy mouse of Hitchhiker’s fame.
If you do visit, look out for the Hitchhiker’s Easter Egg and there’s also a mini race-track if you get bored with the drinks… 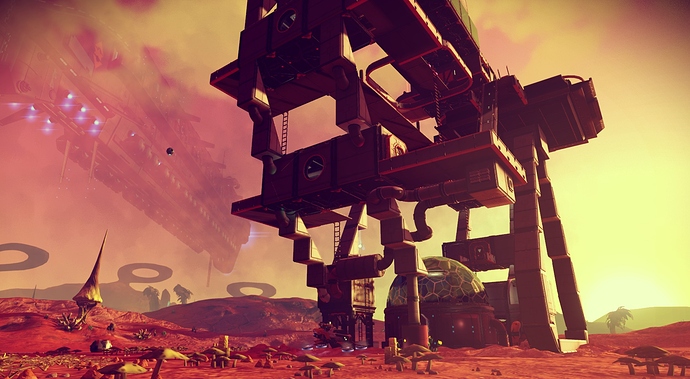 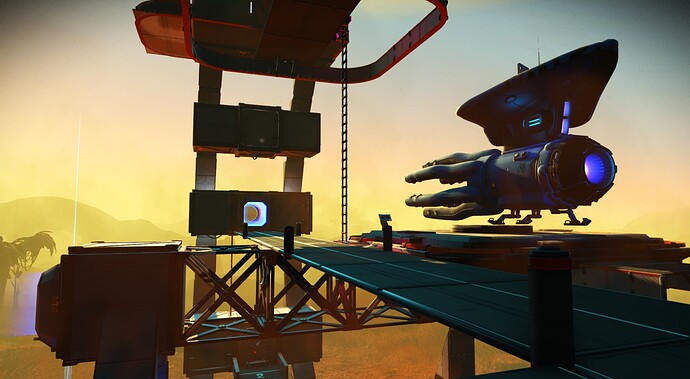 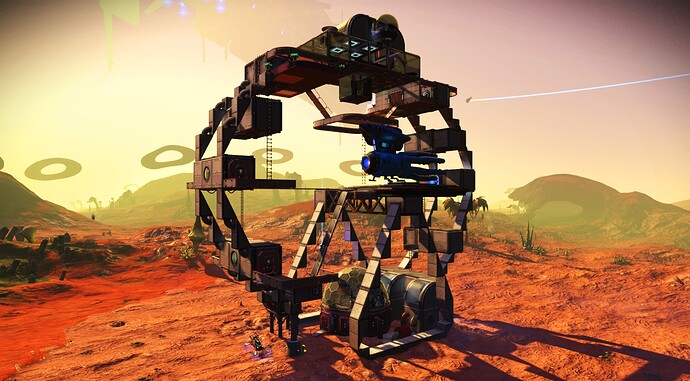 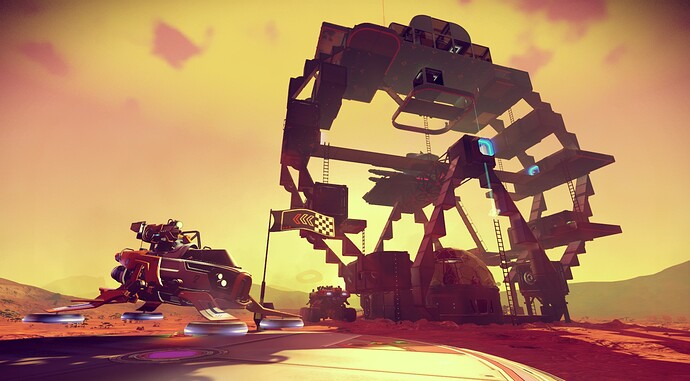 I was there experimenting, building stuff so long I picked up that blue Squid Ship in the star system. The cheese kept me going

I am still enroute, down 40 jumps left at 2300 per. I am going to take my time and look around for a suitable place for a base, taking my time to make sure I don’t claim in a already claimed system. I don’t have to be in the chain, just close.

Thanks. That’s very considerate of you.

I can’t stress enough, you should not build a base in a system where another player already has one. You will destroy the first player’s base, and there is growing evidence that it may never be possible to repair the system.

There should be tons of uninhabited systems around the Etarc hub on PC.
Actually, I think there are tons on PS4 too although there are a huge number of discovered systems following the Spacing Guilds assistance in exploring the locale.
So long as everyone marks their base with a beacon there should be little reason for a system to not be easily identified as inhabited.
Perhaps a census is in order prior to whatever 1.5 brings…?

I don’t want to stay in the same part of the galaxy for ever and ever so what happens to a base when it is abandoned by a player? Does the shell of the base remain intact? So if anyone else lands on the planet can the base construction still be seen?

I seem to recall when I visited the Planet nominated on Unification Day there was an abandoned base but I seem to remember it had more than one level. Maybe I’m wrong about that?

I don’t know either if an abandoned base remains in the Steam Workshop while another has been constructed (but not yet uploaded). Does anyone know the answer to that? Does uploading a base replace the previous? The other lost forever?

I have noted that the cheese terrain sculpture I made for a giggle has sadly vanished yet the beacon and message module remains at the location. I need to check an old save to see if it remains.

I see lots of Youtube videos of amazing bases players have built but are they all destroyed when those players make another work of art? It seems very sad all the amazing work and time on display in those videos should be lost and no one can go re-visit them.

I can always rebuild Mr Noodle’s Playground should the worst happen. Mr Noodle’s isn’t paying @Polyphemus any rent as far as I know and he promised me he’d get his planet (and Star) back. I miss the meandering rivers, green grass and cool lakes of my old world too…

Someone needs to build Mr Noodle’s Playground too on the PS4 to mirror the one on the PC (I don’t have a PS4). Maybe all this base uncertainty will improve in the NEXT update and be cross-platform. That would be great!

Life continues happily though on my journey through Normal mode. So Mr Noodles base remains safe for now - open all year round lol. One day I will meet the ‘real’ Mr Noodles in Normal Mode that would be a real hoot… or squeak…

When you up-sticks and leave a base and you claim a new one the materials are refunded to you at half the cost and are available to use from your new base-pod.

This is why you hear a lot of people, “Packing up” their old base to not lose out on materials.

It would be cool to stumble upon a players abandoned base though.

As far as I can tell, the problem arises from the way bases get saved on the server. Your own base is saved locally, on your computer. So you can always see it.

Other players, however, do not have access to your computer. They can only see the copy of your base that gets uploaded to the server.

However, the server will only accept one active base per system. If there is already an active base in a system, and another player builds one, then the original player’s data will be overwritten by the new one.

The original player may not be aware of this. They can still see the local copy of their base. But visitors to the system will now only see the version on the server, which is the new player’s base. The original one will have disappeared.

If the second player, whilst still in the same game, builds a new base in a different system, then their presence in the first player’s system will be removed from the server. However, this will not re-establish the first player’s base. For that to happen, it seems to be necessary for the first player to turn off base sharing, make some changes to their base, then turn base sharing back on again. This seems to force the server to upload and refresh the original base owner’s data once more.

Unfortunately, the process doesn’t always work. The server can become confused, and continue to try loading data from both bases. If this happens, the system may become permanently unstable, prone to crashes, data errors, and generally unusable.

If you find that you have built a base in someone else’s system, my advice is to move out as quickly as possible, and build another base in a different, unoccupied system. It is essential that you build another base, however crude and temporary, because it is only when you do this that your data from the previous base gets erased from the server. It doesn’t always work, but it’s the only cure I’m aware of.

This thread and associated link topics may interest you in regards to bases echoes being left behind when a new base is built @johnnycloud.
NMS Archeology.

This is all a great help @Mad-Hatter @Polyphemus. Thank you! I had totally forgotten about switching on Base Sharing in options, then switching it off and then turning it back on again! My father flew to a players base and returned and can now see my base with the changes! None of it had been updating and I couldn’t understand why it looked like it did from several weeks back.

It also has used up EVERY resource possible, so I can add nothing more. All items are at ‘max’. It was doing some very odd things preventing me adding new decorations, infrastructure etc. When I removed an expensive item I couldn’t replace it.

The general ‘info graphic’ oddly said 101%!!! Until I saw that I had been reviewing the info only on individual items. That has to be a bug as I have never ever used Mods in the game. Somehow the limit was breached.

Eventually I had to compromise certain objects and delete until I was back to 99% and was able to add a race-track. Hopefully it should load fine as it fits within the limits of the game. Maybe that bug is what causes the bases crashing or reappearing from servers you mentioned.

I also noticed some odd terrain tool weirdness where there had been a LOT of repositioning of terrain. That problem seems to have solved itself now. No more flashing triangles of texture.

All I have to worry about now is being unable to beat my own race time LOL!!!

So I made it to the ECSD Hub and adopted a new home planet and built a new homebase about a week ago . Thanks to @sheralmyst for facilitating the welcome portal and planet. Incredibly enough and by pure chance I have ended up as direct neighbour 11LY away from the system housing Planetus Toxicus, the last time I visited involved an 8hour exocraft haul across the surface to visit your homebase. 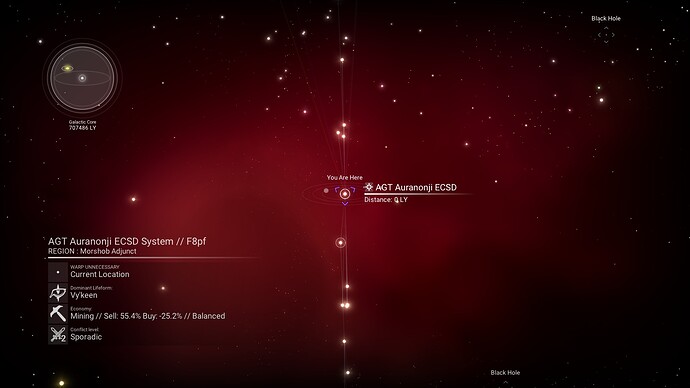 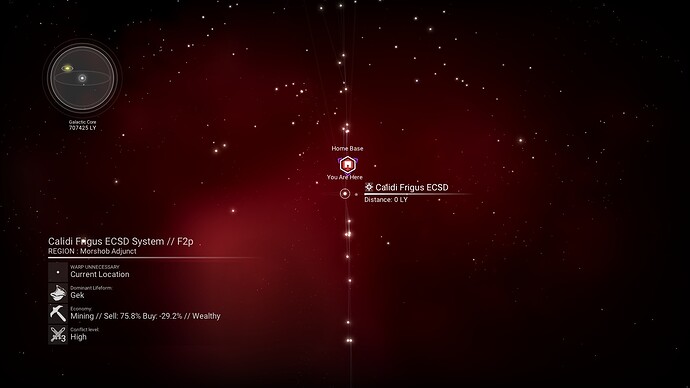 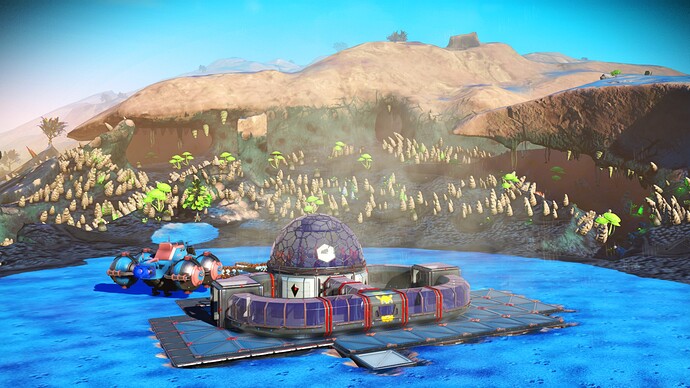 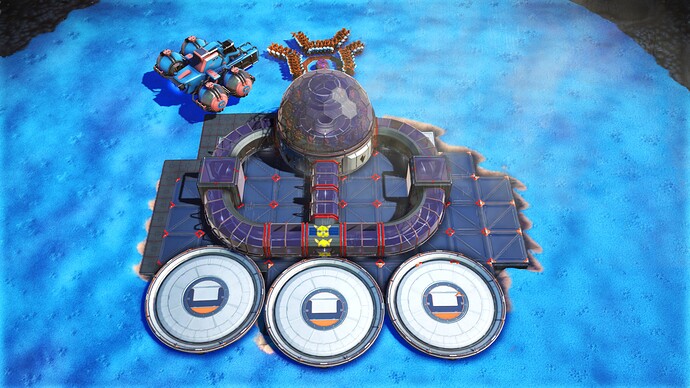 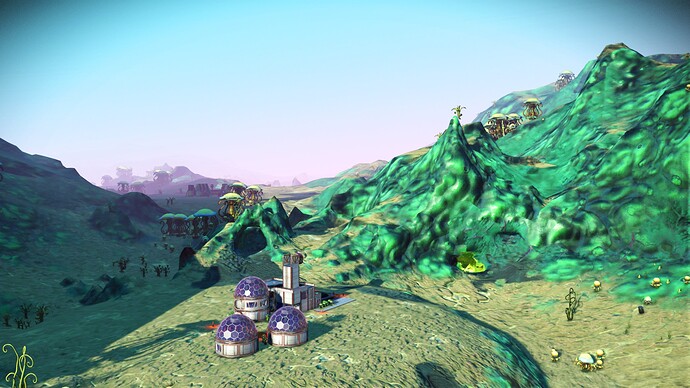 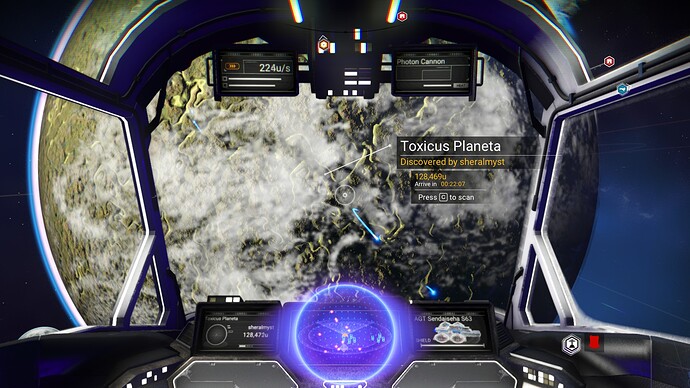 Hmmmm…that is so weird. When did you take that pic? I am wondering why my base is still showing in it’s old look. I reuploaded it to steam and made sure base sharing is on…very strange.
Oh well. Howdy to you too neighbor!

Pic was taken today. If i understand the glitch from what i read elsewhere its because i saved my game while on your planet during my first visit before making it to your base. So other players should see your new base but in my game it will show the old one…weird. hopefully next update will solve things.

Ok, I finally figured out that if I use my visited planets list and mark the one ECSD planet I have been to during a portal visit, the galaxy map just might point me in the right direction! I feel kinda dumb. I was 3 warps away (Pilgrim Star Path estimate) and got another set of coordinets, and still 3 warps away, in the opposite direction. HAHA, I passed it somewhere. Now, when I’m done typing this, I’m marking it and going straight too it. No more flying around in circles looking like I took a wrong turn at Albuqurque LOL.

Base is dismantled, except for storage containers.
Made a dumb move yesterday and practically rage quit. I did my save file backwards, from sd card to pc, and went back to 170000 light years away from around 8000. But, I’ve been writing down coordinates so I can get right back where I was, I just have to claim a base to get my ship and freighter there with me.

Is the ETARCian hub a part of the NMSFederation? Didn’t seem to show up on the Pilgrim Star Path App.

2 Likes
← previous page next page →
All rights reserved by Atlas