I’m looking at the BEYOND artwork I’ve seen around and I’m wondering if it holds some clues about the third part of the Beyond update. 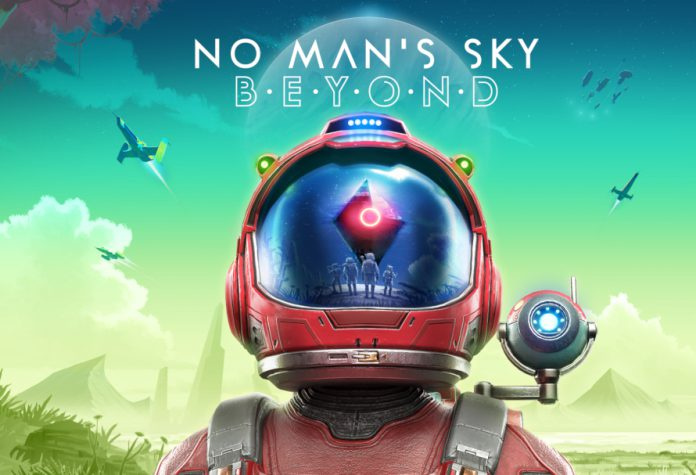 The NEXT artwork showed a number of the features which ended up coming as part of the update, so I thought maybe BEYOND is the same.

Also the colour red is associated with the Atlas, and this connection between the figure in red and the Atlas is only made stronger by the fact that the Atlas is reflected in the visor.

Also the reflection of Atlas shows that the Atlas is looking more angry with its red ring glowing much more obviously and ominously than the NEXT artwork.

Finally, the environment behind the red figure is much more hostile and barren looking than the brightly coloured, rich environments of previous artwork.

What do you think?

Added the NMS topic.
I have noticed the Atlas changing as well. I believe the NEXT figures in the visor may be a way of stating that the previous multiplayer is changing, something new is on the way. It could mean more than that though.
I believe this will be a true multiplayer game now. I also hope this means much more story.

Hopefully dungeons!! Obviously a goupe of 5 travellers? The green makes me think about the awful plants living inside the abandoned posts. Also looking very agressive as you say! Starships… I hope we’ll be able to change the colors! But the best would be more story…

The picture features a player with four other players reflected on their helmet, which means there are actually five players standing there.
Lobby size increasing from 4 to 5 confirmed! Lol

I just wonder how much angrier Atlas has to get before it finally spits out an antagonist.

Finally we get to see her in game!!!

We have one already

I’m not 100% sure, but the 4 players in the reflection are not standing in dirt or grass. Looks like brickwork.

I disagree a bit. At least not a physical antagonist. The sentinels, pirates, biological horrors are close, but they aren’t actively hunting us. They only temporarily slow us down from achieving our goal (whatever that may be) and that’s not in all situations. And in most cases we are the provocateur as we shoot/destroy something to initiate the combat. Just my opinion, but I’ll stop there as not to derail the conversation.

We don’t even necessarily need a villain, just some kind of CONFLICT. It doesn’t have to be player vs. entity, there just has to be some big threat. The Atlas Rises story introduced a major threat, not a being but a threat to all existence just the same. Problem is, there doesn’t seem to be any solution to it and they havent expanded on that story thread since.

To draw it back to the post topic, the red Atlas on the new cover art does seem to hint we might get some new development in the Atlas Rises story.

We don’t even necessarily need a villain, just some kind of CONFLICT

A conflict would be nice aswell. But with something or someone concrete. A new race would be perfect for example…

The Atlas Rises story introduced a major threat, not a being but a threat to all existence just the same

Problem is, we didn’t see any major concrete threat. This danger appeared only in the Lore,nothing that you could find inside the Sim. The only real “dangers” we have to deal with until now are, sentinels, weather, agressive animals and sometimes pirates (not to talk about snappies puffies etc that can be avoided very easily).

Let’s hope that this Red Atlas will be a HUGE threat.

I don’t think what’s needed is conflict. There’s plenty of that already. As has already been pointed out, we have sentinels, animals, and pirates. We also have have some extremely hostile environments. Any or all of these could be tweaked to provide greater or lesser degrees of difficulty.

To my mind, what’s missing is meaningful conflict. At the moment, you can’t win. You actually can’t beat the sentinels - the more you fight, the stronger they get, until you lose, or run away.

Yes, you can temporarily defeat animals and pirates - but they just respawn, and then you have to fight them all over again.

For me, this makes combat pointless. Meaningless. There is neither fun nor satisfaction in a fight I can never win.

It would be so much more satisfying, if, for instance, I could find a planet infested with hostile sentinels and animals that I had to destroy before I could claim the planet. With terrible environments that could be fixed by (expensive) terraforming. With pirates that could be completely defeated if you destroyed their (heavily armed) bases.

Then it would be worth fighting. At the moment, it isn’t.

I don’t think a traveler should be able to conquer a planet. Maybe do a few missions in the context of a faction attempting to conquer a planet from another faction, that would be awesome, but I don’t want travelers to become Doctor Who equivalents…

It doesn’t have to be every planet. In fact, it would be better if they were relatively uncommon, but resource-rich.

Then you would be under constant attack if you landed, and you couldn’t build a base until you’d cleared out all the hostiles and their bases.

It could even be set up so it was too difficult to defeat the enemies on your own. You would either have to recruit multiplayer friends, or NPC allies (based on faction or species status).

But once you had defeated them, they would stay defeated. They wouldn’t respawn. So you would be free to claim the planet, build bases, settle it, farm it, etc.

Most of this already happens. There’s just no point to it. And it’s not as if there’s a shortage of planets to go round.

Perhaps a rare ‘Corrupted’ system would fulfil this idea…?
Similar to ‘Abandoned’ systems but not inhabitable until the ‘corruption’ is cleared out.
This could be made more difficult by having all the planets immediately hostile while the ‘corrupt’ influence is alive. Have all the various bases, Trading Posts, Space Stations, Freighters included in the hostility.
This would require a string of combat & fetch-quest missions to ‘repair’.
Then as a final pay day, have a genuinely excellent reward that makes all the combat really worth it. Maybe the coordinates to a huge haul of Storm Crystals in a crashed freighter or something.

I’m not particularly eager for additional combat but if these systems were fairly rare, I wouldn’t be against it.

Not “additional” combat. What I would like is “winnable” combat.

Sentinels were created with the Grand Theft Auto formula, Sean even mentioned this in an early interview. In GTA, if you break the law, the police chase and try to arrest or kill you; you can kill cops, but this just increases your wanted level until you run away and your wanted level goes down. We will never be able to truly “beat” the sentinels anymore than you can “beat” the cops in GTA.

However, GTA has storyline with enemies that can be beaten, and that’s what NMS needs. You never even fight anything in the Atlas Rises storyline (aside from one instance when interacting with a plaque spawns a single sentinel that attacks you).

(aside from one instance when interacting with a plaque spawns a single sentinel that attacks you).

Indeed. And malfunctioning sentinels would be ideal for the purpose.

Planets policed not by regular sentinels, but by regiments of malfunctioning sentinels, operating out of bases. So the sentinels could be destroyed, their bases obliterated, and only then would you be able to build your own base.

Something similar could be done with hostile animals, and pirates.

The combat on those particular planets could be made harder. But there would be a reason for fighting. You could actually win.

I was just inspired by that idea…
I had the vision of a pack of 5 or 6 Corrupt Sentinels actually persuing your ship through space, draining your fuel reserves, while you move from point to point, destroying their multiple bases. (Similar mechanic to how walker leg armour must be removed before you can blow them up).
The Sentinels would be only minorly damaging the ship but you would absolutely have to keep moving, as they would eventually get you and you can’t get them, until you wipe out every base. This would get extra complex if you had pirates joining in.
Once you’d wrecked all their bases, only then could you get rid of them. Add this to all the typical threats of various planets and you’ve got a fun challenge.