What is happening to Emily? Theorizing the new Waking Titan storyline (Major Spoilers)

Some people have been asking why the Superlumina, Echo and Multiverse websites have turned red and now say “Process Terminated”. I have some ideas to shed light on this. If you have your own ideas on the new storyline for WT, feel free to post them here as the ARG progresses.

It is important to note that I think Emily and the Atlas are one and the same. Because of that, I believe we can use the new lore from the 1.3 update to No Man’s Sky as a prediction for what is about to happen in the ARG.

First, there is an important line of text in the Atlas Rises storyline that @LPlaysGaming conveniently reached in his playthrough just recently. Here it is:

I believe this to be a recording from back when the Atlas was first created, which, as you may know from the Epilogue lore, the Atlas was made by some race of beings (possibly humans) to “show the nature of reality by simulating its own”. Which is exactly what Elizabeth Leighton said Emily’s purpose was.

So my theory is this Emily is going to fail in her purpose, or she already has. This is also supported by a line in the Waking Titan phase 3 lore where Emily says she is afraid because “I could be wrong”.

Emily is going to fail in her purpose to discover the nature of reality, then Elizabeth or one of her other creators will wipe her memory. The Emily we know will cease to be (“you’ll be a different you soon”) in an attempt to make it succeed and she will eventually stop using a human-like interface and start being the red orb interface we’ve come to know as the Atlas.

It may be hard for many of you to accept, and I even hope I am wrong myself, but it is quite possible that the story of Waking Titan is going to be a tragedy.

We are going to lose Emily.

It may be hard for many of you to accept, and I even hope I am wrong myself, but it is quite possible that the story of Waking Titan is going to be a tragedy.

Such stories through out history have been the best stories.
All of this took place in an instant in time, a mere blink of an eye.

I agree, it’s going to have a tragic ending. I’m just wondering, which tragic ending will the community usher in? We know the first season had an alternate ending and also that decisions made effected some sections in the middle. I think the reason the sites are being terminated is, Emilys cutting off the dead weight or useless pieces as she grows and branches out.

My personal theory is it might eventually lead to some form of conflict between Emily and Atlas within the NMS universe itself, with players being required to chose a side.

Oefff, i think Emily is taking over the atlas.

The following is my opinion, my own personal interpretation of what the lore or story provided might be all about. I think they turned development into a fictional story. The program (game), code, functions within, iterations, and more, have become entities, interacting with each other as well as with the user. They have become aware of themselves, ‘existing’ in their own reality, mingled with ours.

So when it comes to Emily, I pretty much agree with this theory, except for Emily ‘being’ the Atlas. I think she is injected as an echo, a reflection, a separate process to make changes to the simulated universe created by Atlas. I believe the Atlas has become aware of this presence and fears its death, a take-over, losing control, being changed, resulting in a shutdown, ‘death’. I think this hints at every update being created, where a shutdown is required to re-launch with an updated version of our game, an altered and improved simulation of the Universe. Of course the Atlas experiences this as a death and after this reset, has no recollection of this having happened. If I were the Atlas, I would be scared indeed and try to express or show my fear. The only language it can speak though, is code … signalling a warning in bursts of 16, HEX.

So basically I consider Emily to have been our 1.3 update, aka loop 16, which pretty much matches the amount of updates the game had received at the time (excluding bug-fixes). Thinking of it this way, I consider Emily to have been ‘good’ instead of evil. She was injected into the core, the Universe aka Atlas, making the changes possible, allowing us to play a new iteration of the game. Loop 15 had done the same thing prior to Emily and likely there had been other loops before.

To me this means Emily mirrors us, the playing community with all our wishes for what the game can possibly become. Emily has learned from us, way more than what can be echoed in a single update. She knows what we want now, with all the data she acquired, provided by us, she can predict what’s to come and knows what will be next. Give it time, a few more loops, for a bright future reflecting our wishes …

Interesting. So then it is Sean Murray that is saying “If you fail, my life will have been meaningless” before he updates the game in attempt to make it a success. Is that what you mean?

That was not what I was trying to say and had not given that phrase any thought yet, but who knows. I am also not quite sure what Sean would consider a ‘success’, but I can somewhat understand the mind of a coder/developer and can see how this would be a nerdy interpretation for that matter.

I don’t think Emily is the Atlas…the story makes two things quite clear: .1) the Atlas is in agony because it can’t perform the reset and 2) the reason the Atlas can’t perform the reset is because it’s stuck in a loop…Emily is actively preventing the reset. When you actually go through the story portals you’ll see 16 16 16 16 appear on the screen and shortly after that the sentinels come after you…because you are a threat…you are capable of performing the reset. In one of the crashed freighter stories you also find that the sentinels used to work for the Atlas but not any longer…which only leaves one explanation…they work for Emily…loop16 took control of the sentinels

I don’t think Emily and the Atlas have anything (directly) to do with each other. I think they occupy different realities, some of which contain distorted reflections of each other.

We have been told that the civilisations of the NMS world themselves created simulated universes. We dropped Artemis into one of them.

(Mind explodes from trying to understand all this lore)

I have captured Emily with help from Nada!!! lol

I don’t want to give people false hope, but I found a rather surprising line in the exotic planet lore that could give us a clue to when the next thing in the ARG will happen. I tweeted an image of it here: 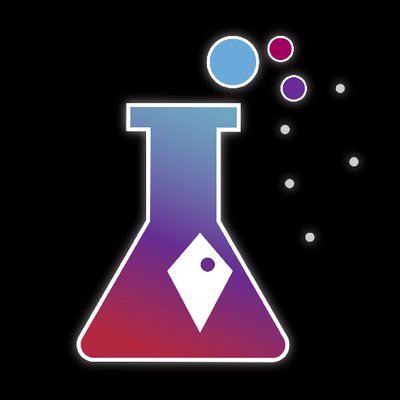 @macforaday
If "Process Terminated" was the "first death" then "it" will be born in one more week #NMS #AtlasRises #wakingtitan https://t.co/FolsoBAOFE 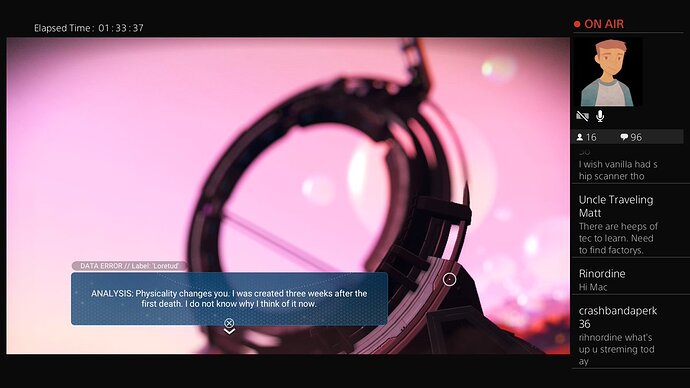 It reads “I was created three weeks after the first death”. The exotic planet lore is believed to be the voice of Telamon, the AI being that lives inside our exosuits. If January 28th, the day that 3 of the Waking Titan websites changed to “Process Terminated” was the “first death” then that would mean that Telamon will be born later this week and something might happen.

Refresh my memory: I remember the sites saying Process Terminated appearing as the ARG ended with Emily telling us there were things to be done and only she could do them but, she would see us again.

No, there was a different message on all the websites and Emily took them over and then said something about Loop16 running them. This is the first time their screens have turned red and said “Process Terminated”.

How soon should loop16/Emily/we start sending messages to the past?
Was it Superlumina, whose messages we were receiving in 2017 from 2018?

Interesting, this brings the Matrix dilemma between the Architect and the Oracle to my mind… also, the numerous iterations of the Matrix before it worked as intended. I hope it’s not to similar to this plot.

Superlumina’s radio broadcast said it was from August 2017, which many took to be a hint that this would be when the update would drop, and it was. So the time Superlumina’s broadcast was from has already past.

However, you are correct that the Superlumina website did have an odd copyright year of 2018, which may have been an early foreshadowing that it would be involved in the ARG this year as well.

I have posted this before, but I wanted to post it here so people can use it to help form their theories. It’s a playlist of what I think are all the best videos that walk through the previous Waking Titan phases. Please use it to reference what happened previously if you weren’t around at the time or have forgotten the details.