For those who have seen it, I’m wondering. Did you pick up on the third timeline early or was it just as much a shock to you as it was to me?

It begs the question, has the man in the black hats story being a future timeline since season one?

Basically we learn that any time weve seen him in season two, it was the sim testing him for fidelity. His daughter was trying to revive him in a future long after Dolores, Dolores-hale and Bernard escaped.

Which leads you to think, what’s happened since they escaped to the real world, that his daughter would bring such a vile man back?

I love that he almost figured it out, he questions his daughters presence before killing her, then starts cutting his own arm open. He knows somethings not right he just doesn’t realise he’s reliving his memories of when the hosts rose up and escaped and I don’t think his daughter was meant to be there in those memories. That’s why we see her at the end, alive and well, and giving her pop the oul turin test.

I always felt his story thread seemed off or disconnected, I wonder how much of his scenes in season one were from this simulated memory? When did he actually die? We see him being recovered by soldiers as Dolores-hale makes her escape so he did go to the forge entrance and blew his fingers off, and after that he’s found and I guess brought offsite, maybe dies soon after or there and then?

Either way this new future timeline is well ahead of the events of Dolores/hale and Bernard escaping to Arnold’s House, as made evident by the state of the Forge during the big post credit reveal.

That’s the only big talking point I can think of since it’s quite the big one and occupying my mind. Anything I missed? Anything else worth discussing or theorising? Let’s see it!

Really enjoyed it! Although ive not read your post completely yet, but with regard to William, I read that all that we saw him go through in season 2 happens in real time, in the time between the end of season 2 and the future part we saw a lot has happened and ultimately he is now technically a host although they don’t refer to him as one because he is more than that and in a quest for “fidelity” has been undergoing the tests similar to the ones he was doing to Dalos, how he got to this point is yet to be revealed and apparently is unknown to him too 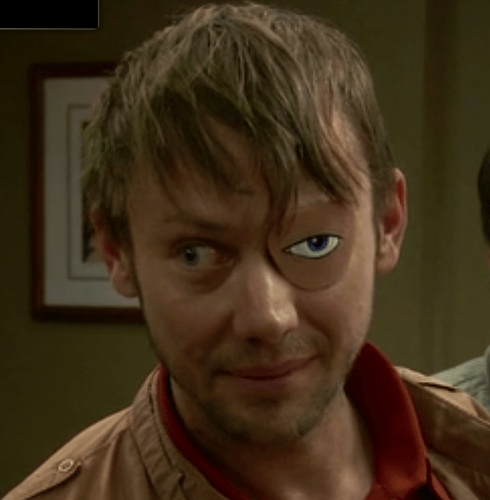 I also found this nice up to date timeline infographic 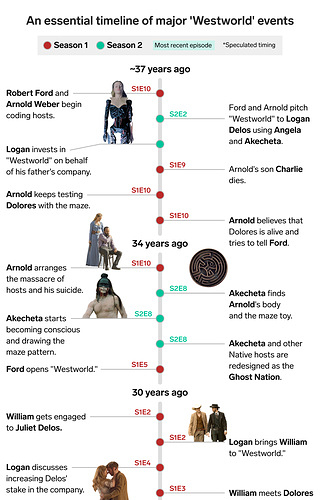 However I still question if there’s not some trickery going on with Williams scenes in the park.

We see him fall for Dolores’s trick with the fired round placed in his barrel. Then we see him get up and go into the forge. We know this never actually happened as Bernard never encounters him in the forge or the lift.

This may be the only scene from the new future timeline mixed in with present events pre-credits, but I’ve a feeling there are other scenes from episodes we think may be Williams present timeline in the park, that may actually be him reliving his memories in some new fidelity test that isn’t inside a simulation, think more like the S3 program in Metal Gear Solid Two, a real world scenario staged to act like a simulation to produce a new soldier equivalent to big boss/snake. That’s how theyre testing the fidelity of this new host.

So either those scenes where he killed his daughter and starts to cut into his arm to figure out if he’s still alive or “already in the thing” are from this new real world fidelity test using old hosts and West world to recreate his time there, or he actually did kill his daughter and this is a host-Emily creating a new type of host using West world and the old hosts to recreate his memories and test fidelity without using a digital simulation.

Outcome is the same, only difference is Emily’s a host and all of his scenes bar going into the forge were in the present timeline.

Can’t wait to see where it all goes

William had taken several bullet wounds and had his hand blown apart from the jammed bullet in the gun. Plus he was trying to dig out the “receptacle” in his arm…since he was questioning if he was real or not. While he was in the elevator, he felt his life slipping away…probably from a loss of blood. He kept saying “not yet” or something to convince himself to hold on. I think his body died in the elevator and the team found him. Remember, it was revealed that the “recorder/transmitter” was in every Guest’s Hat…I am sure tracking was in there too…and he was the VIP of the park.

So cut to William exiting the elevator into the evaluation room…and the reveal that he is now in a host. Which version we don’t know…all will be revealed next season.

I can see the setup for the next season. Dolores and “friends” are out to infiltrate an unknowing Real World to build & replace actual people…much like the second Westworld movie “Futureworld” accomplished. Dolores sets up the new Black Hat / White Hat (Villian / Hero) between her and Bernard…where she will be striving for world domination / host replacing humans and his “role” is to stop her. She recognizes that Bernard will help her “stay sharp” and force her to “constantly change” to stay ahead…much like Successful Companies recognize that Competition keeps them Innovating to Stay Ahead.

While Dolores / Bernard do their thing, how are the Delos Corp. going to spin the whole event? In their world, it seems that there are many many rich people…and if the remaining survivors “disappear”, they won’t be missed. Or Delos could create copies of them, stick them in the park as “guests”, and use media-triage to keep nosy relatives/news agencies at bay for a long while. I don’t imagine that Delos Corp. will be shutting down the park and admitting guilt.

Also to note, we’ve only seen the “rich side” of the outside world. I imagine with everyone acting that way when they partake of the park experience…the outside world must be a very controlled, very disfunctional life-scape. The 3% who have everything and the 97% who live in survival-of-the-fittest environment…where you are basically human animals just trying to exist. Being employed by Delos in the parks…employees were probably educated on Delos’ expense…was one of the most desired position for life. And the employees’ disregard for the hosts’ life and the employees’ lack of regard for each other and human life also points to the “life is cheap” kind of outside world.

his Daughter must be in a host in the post credit scene tho otherwise she would be really old, if not dead! Lol

Daughter must be in a host in the post credit scene tho otherwise she would be really old, if not dead! Lol

While he was in the elevator, he felt his life slipping away…

I still don’t think he made it into the lift in his lifetime, Bernard would’ve bumped into him when flooding the forge on his way out. We see he’s recovered by Delos teams at the end but seems to be physically and mentally demolished. So I can only assume he never got back up after that gun jam, however in that far future timeline he does, he gets up where his journey during the park uprising ended and walks to the elevator.

But yes agree with everythung you said for next season with Dolores/Bernard and I was really hoping we’d get to see just how dystopian this world is and just how much the lower classes must be suffering. Guess we’ll see that next season, I think it will play a big part. I mean, if Dolores sees how we basically treat our own like slaves or hosts, will she have an epiphany, realise its just bad people and humanity is good? Or will she use the poor, rally them to her cause, tell them she’s fighting for their rights too, only to basically use them as lambs to the slaughter? Also who the hell is in Hales body? Is it a copy of Dolores or has she put herself back into her new body and put one of the orbs she took with her into hale now?

Or was she a host all along??

Hmm now that I think back, her first introduction was with that guy talking about how it’s more fun to try and figure out if the person is a host or a human and then I believe she shoots him to prove he’s not a host and to show him she’s not a host or something. Vague recollection correct me if I’m wrong.

Yes you have good point, I know what you mean it’s not as predictable as most show

So it seems some very observant viewers noticed there was an ip address hidden in those delos books that held visitors codes.

It led to a password protected website which uncovered a bunch of video logs between Emily and William with time stamps spanning centuries.

r/westworld - The numbers on the all-black book profile in the Forge create an... 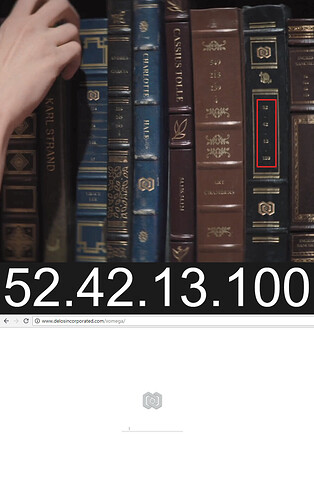 And it would seem there might be an ARG afoot https://www.reddit.com/r/WestWorldARG

(full disclaimer, I do not frequent reddit unless necessary, a friend passed this along to me

They found a code in the trailer, which is binary 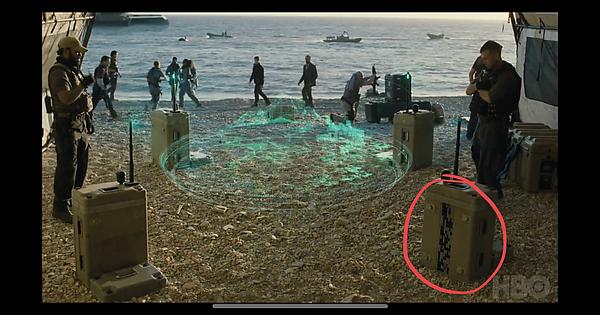 This then led to the below link:
http://www.delosincorporated.com/freedom/
At the end of that video, the login is shown for the main site entrance.

I really want to watch this show but I’m probably not allowed. I don’t want to ask my parents either because whenever I do they get super suspicious for no reason.