System With No Space Station or Monoliths Anywhere

My father seems to have created a base in a system and I just realised there is nothing to discover performing an exocar radar or beacon scan. Is this possible? Is it a bug? Or have I just not yet discovered an ‘abandoned space station’ if it exists in the system and need to search more thoroughly?

I have no idea when my father first contacted the system if his space ship flew towards a station floating lost in space. So I have no idea where to look for an abandoned station if it exists. Do they show up as icons on the space craft window?

I don’t know if you can teleport to an Abandoned Space Station. Has anyone done this?
Does a system with a supposedly abandoned space station have anything it it, on any planet you care to land on?

It’s a bit awkward having to indoor portal to another system space station each time so maybe I shall have to pack up and move.

Yes you can teleport to and from an abandoned space station.

As for systems with no space stations and no buildings, yeah, those are called Uncharted Systems…if you install the economy and conflict scanners in your ship you’ll see there ate A LOT of uncharted systems floating around…they have no dominant species, no economy, and no conflict information when scanned.

You can also create another base and a teleporter next to his base and then you can teleport there whenever you want.

Thanks! I had completely forgotten about uncharted systems. I’ll have to rebuild the scanner thingies. I wonder who is operating the portal service in abandoned stations … spooky!

According to some of the game lore we got from the ARG in the past the portals were ancient relics that only travelers could see and interact with at all…the NPC species are not even capable of seeing them at all, much less use them.

"The Traveller awoke beneath the shadow of a red star.

Through the lonely cosmos they fled,

yearning for purpose and meaning.

They found an anomaly, an aberration,

a door to the heavens. No Gek, no Vy’keen,

no Korvax could see it. Only the Traveller

could perceive the portal, though they

did not know how to step through.

They did not know the secret language,

the glyphs. They did not yet grasp

the price of the final truth"

Well if the portals are automatic or operated remotely I hope their batteries don’t run down anytime soon… my next portal gate on a space station I find will be getting a lot of use!

Ah. Those are not portals, they’re just teleporters. They’re apparently very common technology in NMS and very, very cheap to build.
Which makes me wonder what this entire galactic civilisation needs spaceships for in the first place.

Which makes me wonder what this entire galactic civilisation needs spaceships for in the first place.

To get to our freighters?

What do they need freighters for?

No really though…it’s really awesome to have space ships and freighters and frigates and stuff!!

Oh, by no means am I suggesting they take them out! That would suck!

It’s just that I like some consistency in worldbuilding, and the teleporters introduced a huge problem with that. I get why they’re here, and I get that the problem has been around as long as bases have been, it’s just that with unlimited basebuilding and bookmarking apparently every station you’ve ever been to, it slaps me in the face on a regular basis.
I’m not even sure how to resolve the problem. Make teleporting cost a bucket load of money so travelling by ship is way cheaper on shorter distances maybe? I dunno, at least in survival mode I could see something like this working…

I mean returning to where you’ve been is free…mostly…as long as there’s a space station or you made a base there…but really…there’s a universe out there with quintillions of stars…why stop from going to new places? I don’t think I’ve had a single gaming session since 1.5 where I didn’t go to at least 10 new systems I hadn’t been in before.

But teleportation isn’t infinite…it’s limited to the last 15 pages of systems and/or bases you’ve been to. Your bases are never forgotten by the teleporters but systems eventually are if you go to enough new systems without returning to one you’ve been to.

It’s just that I like some consistency in worldbuilding, and the teleporters introduced a huge problem with that.

What is this huge problem?

I mean returning to where you’ve been is free…mostly…as long as there’s a space station or you made a base there…but really…there’s a universe out there with quintillions of stars…why stop from going to new places?

It’s really more the implications for the worldbuilding that’s buging me than the mechanical effects. It’s a galactic civilisation, they populated almost every nook and crany, and they have teleporters with virtually unlimited reach. within a single galaxy anyways. It logically follows that members of that civilisation can go pretty much anywhere they need to without a spaceship, at apparently no cost. Things like that tend to be a bit of a constant itch in my side while playing. A constant feeling of “wrongness” following me around.

As far as I know, the exact technology utilized in the teleporters is never explained. That leaves the topic entirely open to speculation. That being said, I could think of one major problem, size. The teleporters are always the same size, so its possible that there is a limit to how big they can be. What if you wanted to transport freighter sized quantities of materials, or even a freighter itself? An object larger than the teleporter can’t be passed through it. It may be more efficient to transport large objects, or large quantities of material, using other methods.

Which makes me wonder what this entire galactic civilisation needs spaceships for in the first place.

Teleporters can only do so much but are great for speedy long distance travel. I need the ship to give me freedom to go land anywhere I like and store stuff I collect on a planet. We can only get to the Anomaly by space ship at present, things like that. I think ships look better than storage boxes too 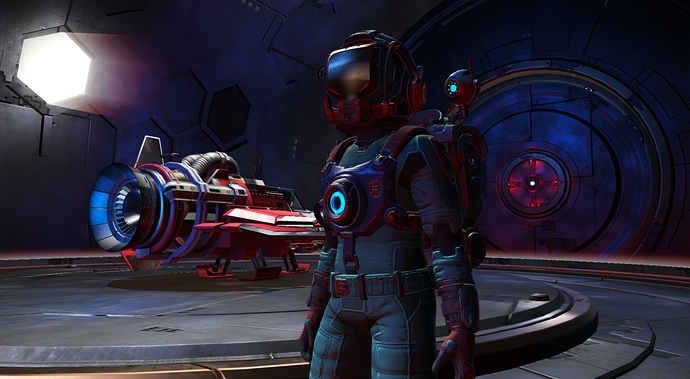 They avoid ‘loading screens’. I can have my ship nearby to hop into for safety while storms pass. I don’t have to teleport back and forth to put things in storage and can decide if I want a hauler for a lot of immediate storage with me or not. 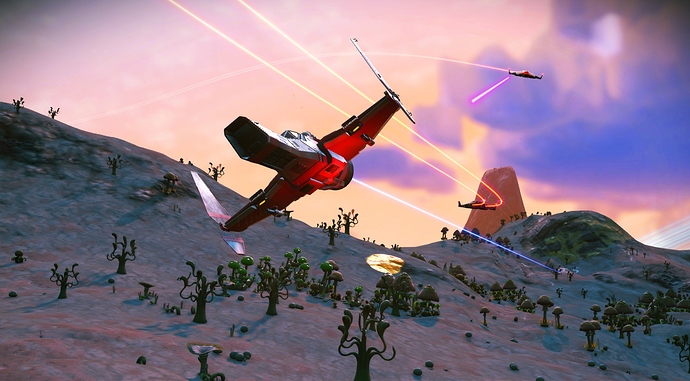 I can also enjoy chasing and being chased by pirates. I can chase other players too lol A space game without starships might be a bit odd. Star Wars would be very different and likely a very long movie…

Once you have found a system or perhaps spent time finding a star gate portal on a planet to tap in an address and travel across the universe, then it’s fair I think to have a teleport means that provides a list to repeat quickly travel from one place to another that you’ve visited before. 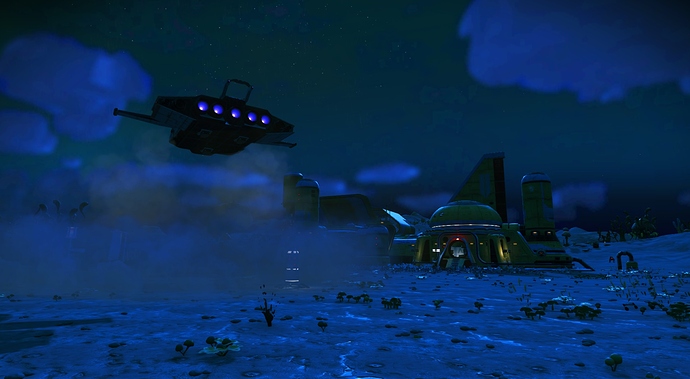 HG could have added maybe a character wrist device or something but it’s fun to run through a larger device you can build. I like the effort and think the game balance of effort and enjoyment is okay, for me at least. 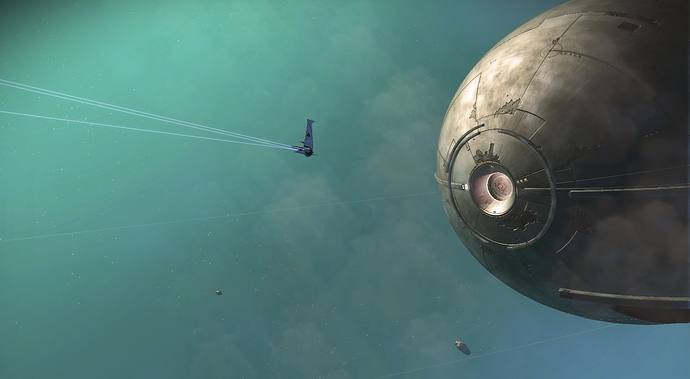 If the game were simply travel here and there by the touch of a button it might be a bit boring and not satisfyingly rewarding. Perhaps teleport travel ought to have an element of fear ‘Here we go, travel time, breathe in! Hope we get there safely’… Maybe if we use them too frequently perhaps we could receive slight damage, temporary reduced vision or exosuit effectiveness. 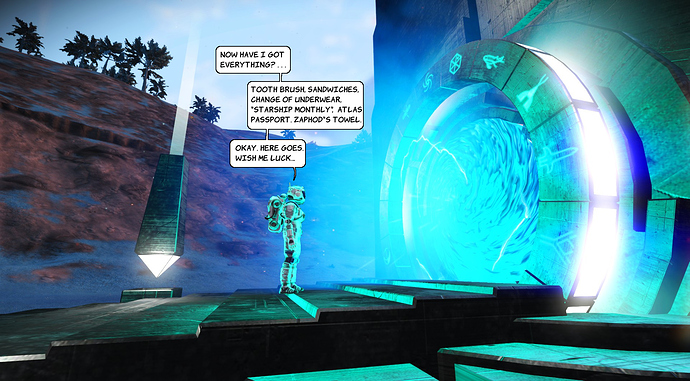 I think of the teleport as an alternative way to travel and navigate around the universe and see wonders, which would otherwise make travelling by any other means a bit of a chore and we all know really it’s a glorified loading screen (but we won’t mention that! It’s really a REAL teleport device hee hee)

And of course we can show off our spaceships to one another. 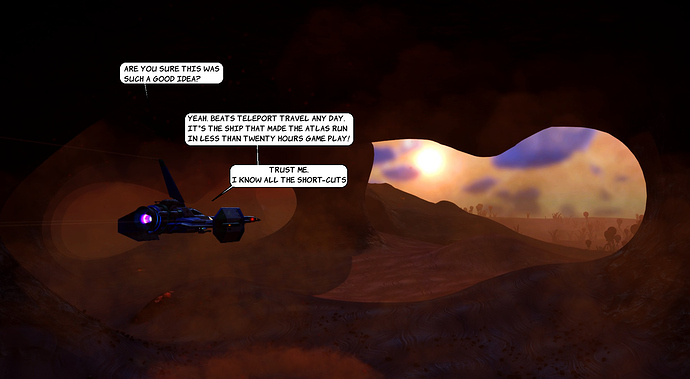 @johnnycloud: I have changed the sub-category to ‘Help A Fellow Traveler’, as I don’t believe this to be a bug/issue.

What if you wanted to transport freighter sized quantities of materials

Right now, I can carry more in my suit than in my freighter

Though admittedly that is because I have a very small freighter.

could have added maybe a character wrist device or something

I think of the teleporters as ‘personally callibrated’ with only the base owners able to use them.
The space station teleporters & the ancient portals are different & can allow anyone with the coordinates already recorded to use them. Perhaps they require substantially more power than a personal teleporter…?

Multiplayers cannot use base teleporters unless they own them so there is still the need for ships to move around systems when base sharing.

I see the teleporters as a useful way of getting about but nothing in NMS will ever beat firing up your ship, rocketing into space & then warping across to another star to explore its planets.

nothing in NMS will ever beat firing up your ship, rocketing into space & then warping across to another star to explore its planets.

4 Likes
All rights reserved by Atlas