Something new I found

So i found this last week. Tweeted at it got nothing. Today there is this! Lol
Titan is the largest moon of Saturn. It is the only moon known to have a dense atmosphere. 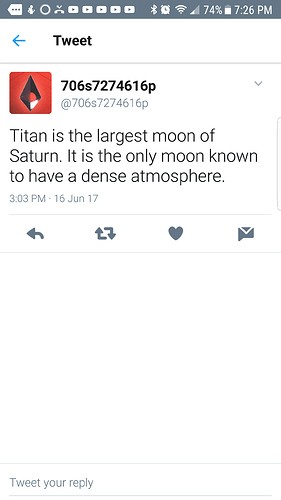 Nah. Has no connection.

I noticed this account when it first appeared as well. Highly likely to be a troll, but I’ve been keeping an eye on it just in case. This new message makes it seem more likely to be a troll; a very feeble attempt at writing something that sounds cryptic (also, I just checked, it was copy-pasted from the wiki entry for the moon Titan).

It previously had a tweet that said Hello Games was giving up on No Man’s Sky, and has since deleted the tweet.

and hydrocarbon oceans! Seas of liquid methane! What a cool world.

Ok, I’m sorry. A little insulting and very cynical. But I feel very dense and a little lost. Hopefully the next clue will help.