So as has been mentioned previously, when you put Glass in Waking Titan you get the following…

glass
There is a world beneath all of this, a world of
– zzktt – glass – kkttzztt…
Those I killed – zzrtktt – Vy’keen, Gek, Korvax,
united in freedom and – zzrttktt –
They did not die, not – zzktt – Even now, I see
their faces. They – zzkttt – smile. We make
them smile…

Just throwing a thought I had in there…maybe ‘the world beneath all of this, a world of glass’ means our world, looking at it through the ‘Glass Data Storage’

Apologies if that makes little sense

Makes perfect sense to me. There’s also a whole section in No Man’s Sky (lore from the abandoned buildings) that goes on about glass that cuts you so fine you don’t feel it, then absorbs you into its substance, and you see all sorts of impossible things and beings.

Unfortunately, I don’t think I have screenshots of that sequence, but I’m sure someone else will help us out.

“There is a world in the great void where all things are made of razors and glass. Pity anything of simple, soft flesh that goes there. The glass is thirsty. It is brittle and crystalline, and so very beautiful to behold - but it must drink. You will go there and you will forget my warning. Then it will cut you with an edge so fine that you will feel no pain, and only as your life gushes out to dampen the cracked and broken landscape will this come back to you. Too late. Too late.”

“Beneath their skin, they had placed tiny seeds of the glass, which took on the appearance of strange, ritualistic scarring. The nubs of the broken crystal were ancient, ground down and polished by generations before them. They fed them their life, and in return the crystals glowed with emerald fires and brought them closer to their fate. I would listen to them talk of worlds they could never have seen, in alien tongues that their body was not made to utter. The glass made them something more than they were, a vessel for intelligences utterly unlike us.”

“It is here and not here. We reach for the mastery of the galaxy but we do not understand the truth. What if I told you that time is the drug that keeps us docile and unquestioning? There is no now and then, there is no today or yesterday. This is an illusion reflected in glass, patterns of untruth that the universe uses to laugh at us. We are not meant to see such things. Our smaller minds rebel at concepts so unimaginably vast that they cannot be held in a single thought. It is how it controls us.”

“I will cut open space. My heart is filled with regret, but there is nothing else to be done. I find only darker roads and glassy, endless chasms ranged before me. It is for the best. The lacerated, blade-filled path is the truth and I am unable to deny it. In time, there will come daring souls far cleverer thanI who will learn from my errors. I forge the way for the ones to come after. I walk barefoot on shards of broken reality, into the infinite and shattering forever. At the heart of it, the secret awaits me.”

It’s very Lovecraftian. Fits with the Old Gods references. I believe there’s another mention of crystals somewhere in the lore.

Many thanks. Exactly what I was looking for.

I preordered NMS and played a fair few hours, but never really progressed to far, just wandered and got lost.
Really need to start playing it properly.
You have to love a bit of a Lovecraftian vibe

I have been mixing this powerfull hallucinogenic with continious chanting while hoping that my mobile could upload pictures to the calibration process, when this crazy theory came to me…
The Forth have been hidding in plain sight.
Under huge glass domes filled with what we took for empty space…
If you ever took a hike into space without your ship and landed on a space-station, you might have notized one particular sound not present anywhere else; shattered glass.
If you got a V3 pass you have seen one particular very enigmatic room; Atlas marked Sentinel maintenance chambers…
Those sentinels, as others have suggested might have been keeping dibs on planetary resources for the Forth, but they kept the stations and maintained the Terminus Net working, while they slumbered.
Space-Stations are a galactic-wide harvesting operation ready to snap over all sentient species.

I’ve seen those rooms. I wondered about them. I took lots of pictures.

In the end, I decided that the things that look a little like sentinels are really exocraft engines. They have axle mounts that wouldn’t fit under a sentinel’s panels.

Well, on some they have quadruped elite sentinels hanging, with racks of replacement parts… Big red “A” on the wall… And there are those others… Rooms filled with computers that resemble servers from our reality…

Just to be certain we’re talking about the same thing, do you mean these? 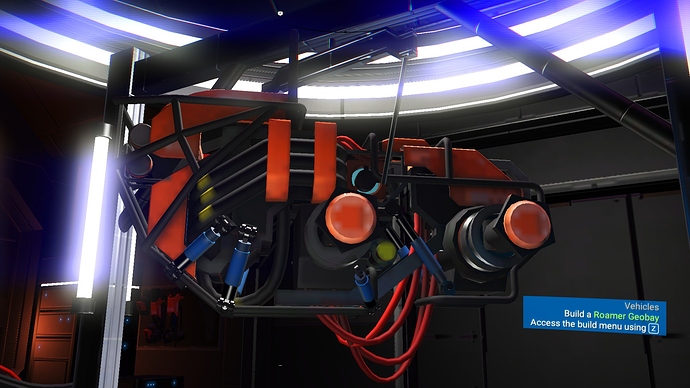 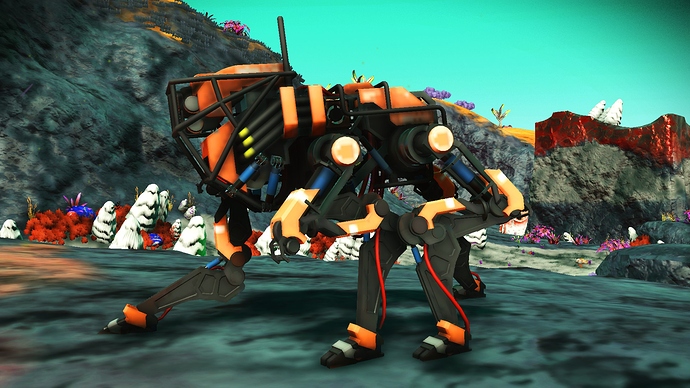 But we know from the lore that the Korvax were experimenting on sentinels, and we know the Vy’keen keep dead sentinels as trophies. So it doesn’t necessarily mean maintenance. Still…

I was on a dead planet last night that was being Aggressively protected by sentinels. It had Albunem Pearls (sp?) and Gravatino Balls. I got away far enough to deactivate the warning. Pretty normal stuff. What was terrifying tho, was when I was wandering in the caves near the area, I heard a metallic scream actually gave me a jump scare, nearly soiled me armor, (oh brave Ser Robin ran away), I scanned the area, and a little “Animal bubble” popped up (weird on a dead planet) I kept walking in the dark, to come to a mouth of a cave, where this guy was essentially trapped. I’ve never seen the animal bubble on them tho. Unfortunately it didn’t scan, but it got me thinking that maybe the sentinels were at one point living entities, that have been corrupted by something. This was also in a 3x3 red star system, and there is a Habital base on the frozen moon of this planet, so naturally I made it my home. More to explore for sure!

maybe ‘the world beneath all of this, a world of glass’ means our world, looking at it through the ‘Glass Data Storage’

Or they might be quite literal… A glass data storage as big as a planet.

Somewhere in orbit around a red star, allegedly.

Both the Atlas and the space stations feature see-thru “glass” floors, plus the “glow” of the sentinels antigravity-floaty engine looks very much like the “glow” of the “tractor beam” entrance on a space station’… which is quite different to the Nada/Polo Anomaly station.
At the end of the landing bay corridor there is a large glassed off wall looking to the internal core which glows blue as well. A power core or something much more…?
I’ve noticed the landing bay corridor on the space stations is sentinel shaped…is there an underlying reason for this ?
There is the evidence of bits of sentinel hardware scattered in rooms accessed by V3 passes suggesting it there is more going on behind the scenes… not to mention you need an ATLAS pass to access these rooms.
The Sentinels are known for relentless replication but we never see a factory and there is a lot of space station area we cannot access.
ALSO
The Sentinel starships warp in from somewhere…and the larger dog-sentinels and walker-sentinels also appear suddenly but we don’t see them at anytime until they get summoned. Teleportation maybe?
Could the space stations in fact be Sentinel Citadels, one in every star system, ready to flood the worlds with droids walkers and ships at a moments notice, all interlinked into a glass based memory system.
The Korvax once adored the Sentinel race in their quest to study the Atlas so wouldn’t that suggest the Sentinel and Atlas are very closely related… which would explain why they seem to share technology including the “Glass” data storage.

…just putting ideas out there

The Sentinel starships warp in from somewhere…

The pirates warp in from somewhere too… I’m really not clear how all that warping works, exactly. Travellers, Sentinels and Pirates can do it, but for some reason the traders always fly on conventional drive.

Could the space stations in fact be Sentinel Citadels, one in every star system, ready to flood the worlds with droids walkers and ships at a moments notice

Should be easy enough to find out. Attack somebody in front of a spacestation. Do the sentinels come out of the station, or are they warping in? I’d guess the later.

I also think if you shoot at a Space station, Sentinel ships come out from it? I can’t be sure without trying, but I’m stuck at work

Just tried to shoot the space station and nothing happens. Ages ago I got attacked by Sentinels for doing that… but now I just get ignored.
Perhaps they removed the Security from the space station because people were exploiting a glitch by dying and reloading previous saves in stations…or something like that. I never tried it so I don’t know how the glitch worked.
I do remember the Sentinel craft always warped in. Maybe the don’t use the landing corridor…they always teleport.

I was under the impression the pirates just lay in wait somewhere scanning and then warped in to ambush you. Just in game stuff the player can’t do.

I always assumed the traders were system locals, ferrying between planets, stations and freighters. I figured that’s why they’re always the local race and why ships are system-specific.

If you ever took a hike into space without your ship and landed on a space-station, you might have notized one particular sound not present anywhere else; shattered glass.

How did you get in Space without youre Ship??? Im playing NMS since release but never discovered how this should work either the shuttering glass soun??!

There’s a note somewhere in the game lore about “who are the pirates?”. A little similar to “Where do the Sentinels come from?”

Unfortunately, I don’t have it to hand. But the origin of the pirates seems to be as much of a mystery to the people inside the game as it is to us.