In the spirit of “no stone unturned” and due to my tenacity, I have finally made the sci-fi connection of 3/5 of echo logos.

I was as satisfied as anyone else with rekall being recall. Even led to Phillip K. So I let it be. Louis Creed was (seemingly) obvious even though it was the wrong genre. But bonanno was the thorn. And finally sparked the right train of thought.
So here’s the bonanno link i like over the crime family. (Even though the often used theme of gangsters in TNG holodeck is what led to the Google search)

Once that sank in, it became a Cascade of realisation. (The wife hearing a recap and watching pet semetary afterwards helped here lol) I’ll direct your attention to Rachel Creed:

Which naturally led to “trek total recall” in the Google bar. Once again: pay dirt. 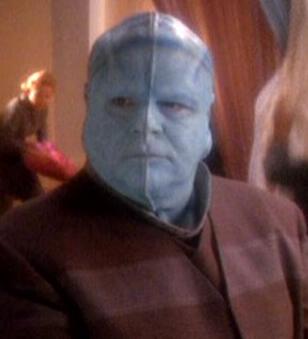 Frank Kopyc (born 6 August 1948; age 69) is the actor who played the Bolian aide in the Star Trek: Deep Space Nine episode "Let He Who Is Without Sin...". Primarily a stage actor, Kopyc is the best friend of DS9 co-star Armin Shimerman, who...

This one was more difficult to link as no one site seems to have credited all the actors. Reddit had, but it was a birds nest. (Like this post isn’t…)

So me being half mad, I immediately looked for a tng episode that had Tasha Yar and a temporal theme that fit… My goodness…

I’m going to need someone else to watch season 7 episode 25-26 “all good things” of Star trek tng and get back to me with some insane theories, STAT.

I was actually wondering about the Bonanno part again recently (the Bolzano password reminded me of it). Thanks for digging this up.

Last week a couple of members of the Bonanno Family were caught here in Spain, arranging a shipment of “not geknip”… Had me thinking about hiperluminal information, somehow…

That’s pretty nifty. I’d like to add there is another ST episode with a temporal theme in which Tasha plays a much more central role, Yesterday’s Enterprise.

I’ll be watching it in a minute then. Flix has your tng needs covered. I’ve surely seen every episode four times over, but there’s nothing like a refresh to bring out missed details.

Hmmm, Star Trek …
Maybe a bit off topic, but guess who became the announcer for the Howard Stern Show in 2009? I am not too familiar with the show however, but I think George Takei, aka Lt. Hikaru Sulu, is still often part of the show.

George Hosato Takei (/təˈkeɪ/; born Hosato Takei, April 20, 1937) is an American actor, author, and activist. He is best known for his role as Hikaru Sulu, helmsman of the USS Enterprise in the television series Star Trek. He also portrayed the character in six Star Trek feature films and one episode of Star Trek: Voyager. As of April 2018[update], his Facebook page has attracted over 10 million followers since he joined in 2011, and the account frequently shares photos with original humorous ...