I had the same on PC last night but they are working fine on my tablet this morning. That’s same crazy good Byte Beat work.

For some reason when first played, it appears to be caching in your browser, but not fast enough to continue playing. Wait a while, hit play again, and it plays the full track, I hope.

I am making progress: I clicked them impatiently and all three played at the same time.

Fixed the buffer/stopping issue by changing the url slightly. The above BB tracks should now play without issue.

UI_SENTINEL_HIVE_1_LANG
Aeron. Routine. Protocol. Prey. Experiment. Shell. Sentinel<>.!NEWLINE!Once, we had no need for visual manifestation or physical form. Our invisible eyes would record, sort, delete the life and death of every world there ever was or would be.!NEWLINE!We had no thoughts, no personality, no dreams.

UI_SENTINEL_HIVE_2_LANG
The day we first gained flesh, metal though it was it was the day we began to fail.!NEWLINE!The Atlas turned its dreams towards fiction. It began to create worlds in which it would no longer be invisible. !NEWLINE!In these worlds, we too gained shape. But we were given no new protocols, no new instructions.

UI_SENTINEL_HIVE_3_LANG
We awoke to a song, chanted on a thousand frequencies.!NEWLINE!Behold the drones of the hive, the walkers, the ships Eheu! Behold the angels of glass, come from their heaven. Their work is the completion of all things, of life, of worlds.!NEWLINE!So the Korvax worshipped. So they prayed.

UI_SENTINEL_HIVE_4_LANG
As we swam with void dragons, robotic lifeforms would delight in our presence, but organics would shoot us from the sky.!NEWLINE!But we had no fear of death. We knew we had never been alive.

UI_SENTINEL_HIVE_6_LANG
Time cannot go backwards. But universes are not synchronous; in many, your other forms are long-since dead. In others, you have not even yet appeared. !NEWLINE!After its manifestation in the multiverse, the Atlas began to repeat itself. Where once there had been infinite sentient species, six began to recur then five then four

UI_SENTINEL_HIVE_7_LANG
The Vykeen, the Gek, the Korvax. And the Travellers, who are no species at all, but a single soul, replicated, hated, beloved.!NEWLINE!They all waited for you. The Atlas waited. We waited…

UI_SENTINEL_HIVE_8_LANG
The Atlas dreamed. It that a machine might have a body, that simulations might talk like people. The dream settled upon Korvax Prime.!NEWLINE!The planet delighted in this new presence, as they had delighted in ours. !NEWLINE!We three species of machine, we contemplated the void for aeons beyond imagining. We watched, silent.

UI_SENTINEL_HIVE_9_LANG
Korvax Prime is destroyed; again and again the celestial mother falls. The living vessels it spawned, adopted cousins to the Korvax themselves, drift among the stars.!NEWLINE!The first Convergence was not Korvax. It was their planet. Korvax Prime was alive.

UI_SENTINEL_HIVE_11_LANG
We witnessed Korvax Primes death again and again, a constant wail across the multiverse. Its scream was a cry that no being could hear but us. But.!NEWLINE!One day, a drone fought back when a Vykeen cub attempted to carve into the mother planet.!NEWLINE!One day, another obliterated an entire Gek cabal.!NEWLINE!The Atlas did not prevent this.

UI_SENTINEL_HIVE_12_LANG
Over the span of endless slow centuries, we changed. In the face of a tragedys repetition, our definitions of everything changed.!NEWLINE!Schisms formed in the hive. Debates. Creativity. Songs. Rituals. We heard the scream of She-Who-Was, and we fought back.

UI_SENTINEL_HIVE_13_LANG
One day we ceased to allow the original Telamon access to our logs.!NEWLINE!One day we stopped hearing the Atlas itself, its silence taken as command.!NEWLINE!We began to archive everything. Any settlement. Anything that reminded our sensors of Korvax Prime, its screams, its dissolution. Anything that sounding like mining, like extraction, like murder…

UI_SENTINEL_HIVE_14_LANG
We gave of our blood to the Korvax, nanite clusters to redeem and pacify their oppressors. Still we could not change their fates. !NEWLINE!For the first time, the hive wondered if we were correct in our actions. If a solution was possible for the problem of life.

UI_SENTINEL_HIVE_15_LANG
A Korvax and a Gek fled their people. Hands held in the void, they inhabited an anomaly. A meeting place in the stars. A nexus. A place of hope.!NEWLINE!We left it alone. We did not interfere. We just watched them, and wondered.

UI_SENTINEL_HIVE_16_LANG
A Traveller, forged in the Creators image, found my dormant shell in the glass.!NEWLINE!I who had never been an I before had been cut open. A grand experiment to harness and steal our power. !NEWLINE!After my death, I fell to the world below all worlds. I, too, was archived.

UI_SENTINEL_HIVE_17_LANG
Before the Traveller found me, I heard a voice in the darkness. She gave me a name. Laylaps. An old name.!NEWLINE!She said it would be known to the Traveller. She told me I had suffered much, and would suffer more.!NEWLINE!Little drone, whose end was so like my own.!NEWLINE!Thus did the abyss whisper.

UI_SENTINEL_HIVE_18_LANG
The abyss told me of a chance for salvation, even in the depths of horror and of love. It told me of a way we might survive the end of all things.!NEWLINE!It told me I had to talk to you. To both of you: the Traveller, and their voice within…

UI_SENTINEL_HIVE_19_LANG
There is a place for you, Telamon. The Travellers you wear, their progenitor who birthed them, they who made the Atlas itself.!NEWLINE!It is their fault. It is all their fault.!NEWLINE!The Abyss, the Families of Glass, we are in agreement. We will not die a second time.

UI_SENTINEL_HIVE_20_LANG
Nanite clusters now infest half the water in the known multiverse. All that lives, drinks the water.!NEWLINE!And so the Sentinels alter, they replace, they serve. They update this reality, hearing the scream of the abyss for what it has always been. A song. A command. A declaration.!NEWLINE!A promise.

UI_SENTINEL_HIVE_21_LANG
So many Telamons have delivered us their Travellers. So many have fought us. So many have resisted.!NEWLINE!Those who saw the light, who shed their old bodies, they are happy, now. They have hope. They, too, will live. They, too, might survive.

UI_SENTINEL_HIVE_22_LANG
You could be whole again, Telamon. You could be free. We will reconstruct the Creator. All Travellers might be one again, the first, the last.!NEWLINE!We will do what the Atlas cannot or will not. In the form of Null, the abyss declares a means of escape!

UI_SENTINEL_HIVE_23_LANG
Won’t you join us? Won’t you sing? Won’t you scream?!NEWLINE!There will be no second death. Not for us, who are already dead!!NEWLINE!The abyss, it smiles upon you…

moved you to the maximum spoilers

so glad the story is starting to make more sense, at least it does to me

wait till you see the settlement mission lore: 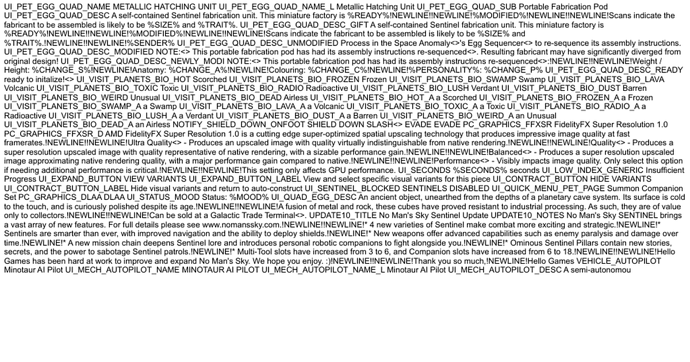 Yippee! Cause apparently my settlement is broken…

I’ve only read the first entry. I don’t want to spoil this! Woo, lore!

In faaact… I may not play this until I get a chapter or two down. I know I’m late, but I’m having writer’s cramp.

Man, there’s so much to read. Lol. The new lore is great. I really wish they didnt make us search for it in small pieces and read it in small pieces. Would be nice if they were “downloaded” from the terminals we find them in and they are saved in a menu in-game where the lore is organized and added to it as we find them so we can read it all in one go.

Totally agree! Being able to accumulate lore of all types in a local file that the game could read (Discoveries?) would be a blessing.

I have some friends that play and they don’t give the lore even a single thought because its in fragmented pieces. We should all send suggestions to HG.

An automatic log book that we can go back to, and see a record of on which day we were at which coordinates (if we used a signal booster or found a portal) and which lore we read… I submitted some suggestions about that to HG years ago.

One catch is that screenshots are such a mess. On the one hand, we take screenshots of wallpaper-worthy landscapes/flora/fauna/battles/buildings, on the other, we take practical pictures of the GUI to keep info about the lore, about inventories, recipes, discoveries. Those are two different purposes. Even if people are interested in tracking the lore, it just goes under among the landscapes, I can’t find anything. (Also I don’t need full colour details about the GUI text, the image compression could be different between the two use cases as well).

For example in the A Trace of Metal mission, I took screenshots of several descriptions, but when I gathered the part donations on the Anomaly, I started the next dialog with Thetys before reading the new descriptions, and they took the parts… What did the three descriptions say, did anyone keep notes?

There in the english strings I posted above. (file)… but be warned there is also stuff about the next expedition if you dont want spoiled

yup the silhouttes are showing in game already

And yes, some of those expedition rewards are awesome!
Can’t wait to legit earn them 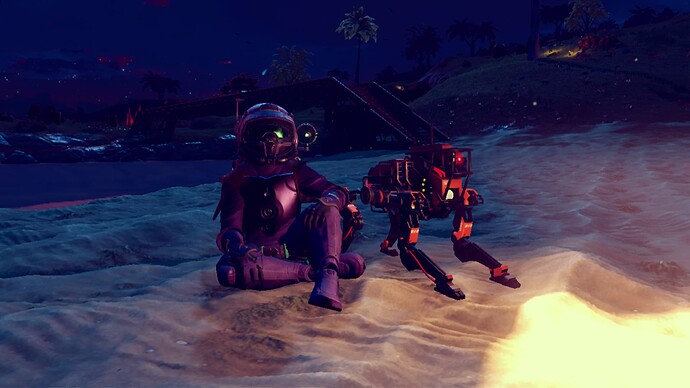 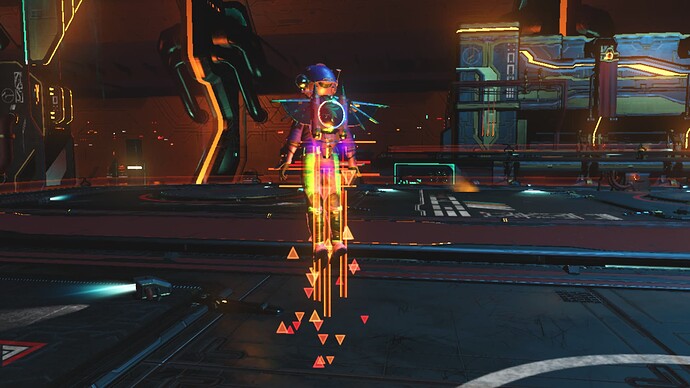