It is amazing how many post are about the new things and the problems it has created.
I can understand that since this is version 2.0!
I guess, figure, HG as I’ve said many times before … does not listen.
My problem with the game since 1.3 is the complexity that has been added.
To me it takes the fun of exploring away.
When I started a new game, the pressure of getting items to fix your ship is bad.
I have seen post on players dying before able to do anything.
If I did not have my backer ship, it would be nearly impossible to get anywhere on hazards planets.
Since I’ve played long enough to know how things work in the game, I am able to progress.
We have seen people post they are not playing the game anymore due to the addition of electricity requirements.
It just isn’t that … the fun of exploring has been removed.
Follow A to Z before you can explore. Hurry hurry hurry

I’ve passed this game on to others to get others to play because I like the game. BUT…

Why make the game more difficult to play?

@zsigmond: I have added the ‘No man’s Sky’ category.

Yeah. I can understand. However, I take a casual approach to a new game. I take time to explore and gather things I know I will soon need like Tech Modules.
I electrify only what I have to like storage and I keep it simple. Solar panel and battery.
Some people approach games with the ‘hurry and race through the missions so I can explore’ mentality. In fact, the missions are supposed to lead you to exploration and do that successfully if you take a more casual approach.
NMS is unlike any other game out there. It really cannot be approached like any other game.
As for the beginning, you will always encounter a storm when you have to reach the hermetic seal. It makes no difference what planet you start on. The idea being to introduce the player to the different situations they will face and how to deal with it in a pinch. Think of it as a NMS Survival Tutorial.
My biggest problem is how the missions quickly begin to stack up and this sometimes leaves me a bit confused on which mission to focus on next.
All in all, I am loving the new tutorial pop ups and the reworded story line.
Now, what the heck was I just doing…?

Here is my ‘just the basics’ new start. 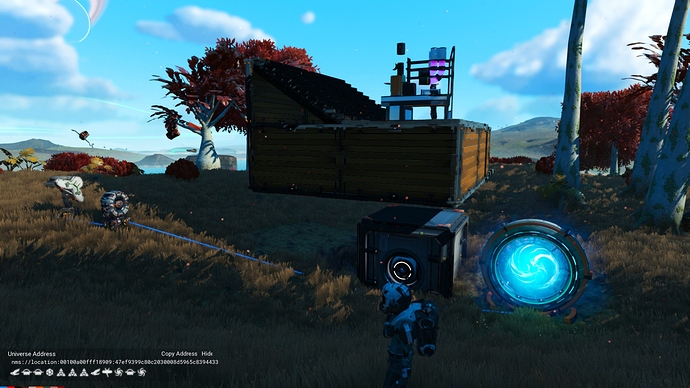 I’m of mixed minds with NMS BEYOND, much like I was with NMS NEXT.
Initially, both times, (particularly with chronic stability issues), I was annoyed that elements I wasn’t overly thrilled about, introduced new problems.
Then, once you get a feel for the changes it begins to feel familiar again & I felt more settled.
As @sheralmyst says, NMS is utterly unique in the huge world of games. It focuses on just wandering the universe, improving your position as you go and just doing whatever suits you each play session.
Compared with everything that came before BEYOND is very much a NMS 2.
It carries on from what we all remember from the time of THAMIUM 9

(and before) & throws us back into the same universe but it is once again very different with so many more ways to approach things. New players won’t see this but us ancient ones have all had to relearn NMS a few times over.
The trouble with NMS is that it is so unique that seasoned gamers who are used to rushing about forget to just chill out and wander, which is how NMS is best played. A playthrough might take months if you just settle back and absorb the ambience.
BEYOND should be played slowly. I use a notebook as a shoppinglist and am gradually relearning where to find what I need. It’s also good to note where certain items can be found should you need to return for that certain ellusive something (in my case at the moment, an Oxygen Filter).
Chill out and wander. If you get frustrated, log off for a bit. It’s a game. It’s meant to be fun.
I hope that from now on HG will concentrate on streamlining and adding simple extras rather than massive overhauls but I love NMS more than ever now.

I just timed myself. Took 14 minutes to get off the planet including taking notes. As long as you immediately gather sodium for Hazard Protection and refill it, then gather carbon, ferrite and more sodium as you proceed through the rest of the missions, people should not have a problem. They can refill their hazard protection as needed or duck into caves. Save before running for the Hermetic Seal. Once that is gathered, the storm ends allowing for easy gathering on their way back.
Make sure to repair the scanner visor before heading back to the ship.
Construction of the refiner only requires ferrite to make a metal plating…

In the startup, one quite obvious thing to help you, that a new player, (or a dumbass like me) will not utilise is the camera.
The moment you can, activate camera mode, switch the sun position to the opposite side of the planet (night setting) & you can pinpoint sodium & oxygen glowing in the dark. Very handy & takes tbe panic out of the first minute or so.
Particularly useful in frozen biomes where resorces are scarce & hard to see.
I also spend quite a bit of time collecting vital materials before my first launch.
Might add this to the tip thread.

Now it took me over 3 hours to get off the planet I started on.
Jumped to a new system.
Found a planet that it could explore on.
Over 8 hours wandering and exploring.
Slowly things started to show up.
At first could not find building.
But a trading post is where I started my base.
I do not go at the game fast.
Never have.
I played my main account that I have in over 1000 hours.
My hauler barely fitted through the exit.
Went to rebuild the base.
That is where the drag, the insanity of it all showed up.
So I parked my hauler and left the game for a bit and started this thread!!!

I agree the freighter/command ship landing bay opening could have been fixed. It’s pretty messy and a very regular thing to witness when playing.
Next update maybe

I guess, figure, HG as I’ve said many times before … does not listen.
My problem with the game since 1.3 is the complexity that has been added.

Apparently they listened to me, since I wanted all that complexity. And I’d still like some more of it…
I understand that this can be frustrating if the game is going in another direction than you wanted it to. I think this is true for everyone to one degree or another. For example, it pains me that so much effort goes into multiplayer, an aspect of the game I couldn’t care less about.
But saying HG doesn’t listen because of that would be unfair, because there’s a darn lot of people they have to listen to…

It’s not like we asked for a few simple things either. We are so needy.
One aspect I am enjoying more than I thought I would is walking NPC’ s. So nice.

I saw some sitting on the floor

So many couches and not a cushion to sit on

There was that option to sit on a couch.
But not at the Nexus.

you can sit with the emote command.

That is one of the things they show in the trailer.

As far as I’ve seen, couches are not sitable, only some chairs are (all those that cannot be spun). At least, any couches at the space station cannot be sat on either. I think I even have a pretty good idea why… Programmatically, you’d basically have to chunk the couch into multiple objects to allow for that seamlessly, or write an abstraction to the same effect that would be quite a bit less simple than just tying an object to an interaction…

Actually, I have been able to sit on a couch on the Space Station. One facing the Trade Terminal and I can sit on the couches on my Freighter and in the small Trading Posts.

Ok, now that’s interesting. I haven’t found an interactable couch yet, I’ll have to look more closely it seems. All the ones I happened uppon were not sittable, so I assumed none would be… Whichever way, I would assume that in multiplayer 2 people can probably not sit on the same couch…

You are right about the couch being multiple objects. The space station couch is more like several chairs linked together. I keep trying to get a pic of me and 2 NPC’s sitting together but, on my first try my camera would not show me sitting there and other times one npc would get up before I was ready to snap the pic 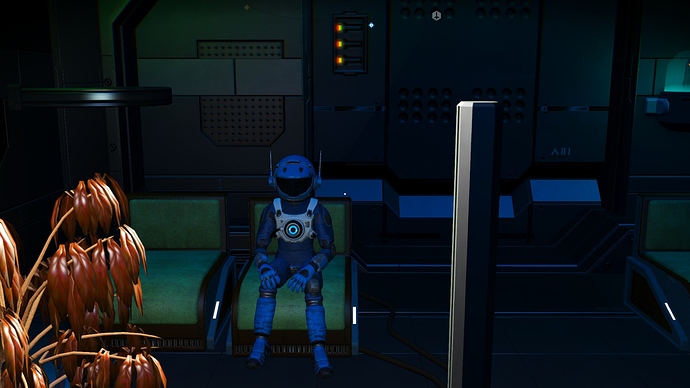 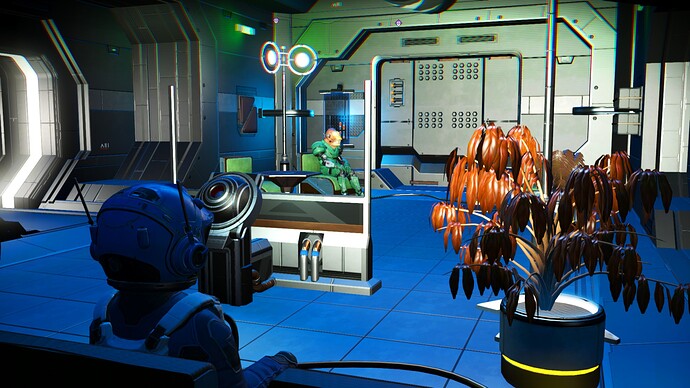 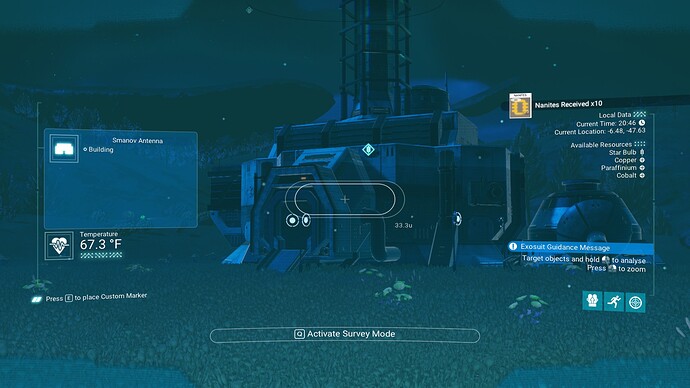 So who won the ‘don’t blink’ contest? You or the Vy’Keen?