I’ve got 2 companions at present: the mech-beasty I mentioned earlier which is friendly but gets in the way and a young, rather ‘needy’ 6 legged, horned, wolfy-looking thing that wanders off.
I like that they sleep at your feet like a real pet, if you sit down to rest.
I can’t get much game-time in these days but I’m enjoying this exploring with a buddy.

Next time I’ll give the sequencer thing a go…

I feel like studying the dyes for mechanicals, they are not listed yet.

And since my formerly harmless bytebeat party planet has turned into an aggressive partycrasher planet anyway, the partycrashers can do something useful for me und become my study subjects.

It appears that mechanical/robot like companions do behave somewhat differently to colour changes as well.

I feel like studying the dyes for mechanicals, they are not listed yet.

My first pet, a roughly player-sized tauntaun-ish creature from one of my base worlds, already had a desired color scheme. The guide proved very useful for my second pet though. I started with a giant dull-colored strider from another base planet, and made its offspring a lovely “suit-creature”-matching red. Results will vary from the charts though, as the original creature’s markings play a significant role. For instance, I used carbon to dye my strider, but it has barely a hint of blue. Other random creatures I experimented with carbon on ended up with very prominent blue stripes/scales/etc.

Apparently both the robots & the Garthim-like golem creatures use their own sets of color palettes, different from the rest, so those are two areas worth exploring.

Some cool techy info… I’ve explored the pet data in the save files a bit. It seems a few properties, like gender & default name, are procedurally generated based on what appears to be a timestamp of the creature’s spawn/adoption. All of the animal model’s specific sub-parts are explicitly listed, so I’m guessing it’s possible to completely customize the pet’s appearance by modifying those entries. I didn’t have a list of valid part names handy though, so I haven’t tested that yet. The coloring seems to be specified as a procedural seed, not RGB values. I’ve tried substituting some arbitrary values into it and my pets’ palettes did indeed change in unpredictable ways. I haven’t tested it in multiplayer, but if it works like ship seeds then others should also see the changes. So coloring is also probably far more customizable beyond the in-game materials, but would be a lot of blind trial-and-error.

Apparently both the robots & the Garthim-like golem creatures use their own sets of color palettes, different from the rest, so those are two areas worth exploring.

Okay. By garthim do you mean the ones that look like steampunk fossil beetles?

At closer look (from a respectful distance), the creature I returned to, that I thought was a robot, turned out to be a fossil beetle. So I still don’t have a test subject, but I’ll keep looking in red star systems. Or, if I find a fossil beetle I like, I’ll experiment with it as well.

Is it possible to hatch eggs prematurely? My first mutated egg says 24h but it’s interactable…

And why does everything in the middle breeding slots say unstable? Does it mean they cannot precalculate (and put into words) what the outcome will be?

If you try to hatch an egg early I believe it just gives a warning message. I think the inability to “put into words” is probably the best explanation for the “unstable” label.

From my observations so far, the sequencer is procedural (appropriately enough), yielding consistent results based on inputs. For the dye injector, specific materials always yield the same color combos for most creature types (as shown above). I don’t know how % factors into it though, I’ve always put 100% worth in. The gene splitter, on the other hand, seems entirely dependent on the %. Specific mutations (if any) always occurred at the same %, regardless of what materials I used.

The offspring of my darkgreen mushroom hatched into a beautiful teal mushroom with cute pink flowers.

Riverpito the girl-mushroom. The description said very large, but it’s the same size as the parent. Or… is it still growing? I didn’t put anything into the character slot, so they are equally friendly.

In other news, I found a planet with two types of mechanicals.

They are the best.

Here you see me and Riverpito check out the beautiful horsies! 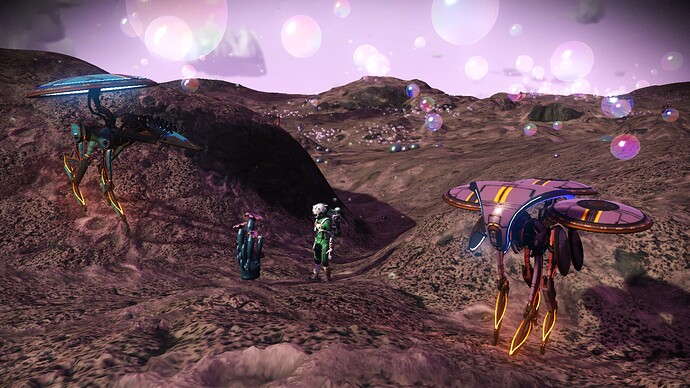 PS: the teal-and-pink colour stems from antimatter in the dye slot

I can ride it but the umbrella collides with my backpack. 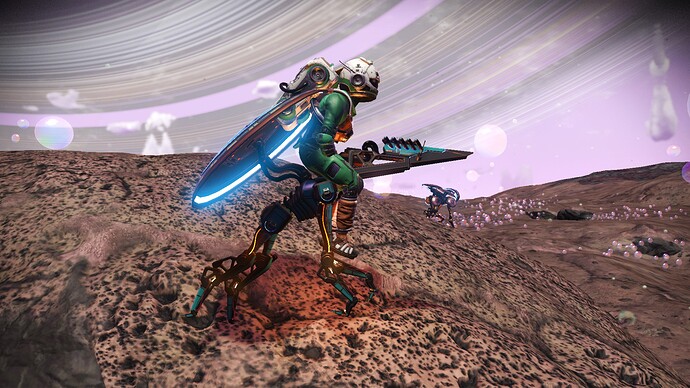 do these guys grow

No. I was hoping they would. Must use the egg sequencer to make them larger or smaller.

Interesting, because I have been reading about pets growing in size as they age, although they appear to reach max size slower (2 weeks or so) than they reach maturity and ability to reproduce (1 week). Time being real time as well, so takes quite a while. I even read somewhere that growth speed is related to parent size, with small creatures growing/maturing faster than bigger ones.

Then again, don’t take my word for it, as I have no clue, other than reading about it in various places.

Hmmmm, so that is interesting. None of mine have grown. I will keep an eye on my smallest one.
Edit. Saw one report that it takes 15 days.
I have a question though because one of my kiddos was able to hatch an egg after 3 days…but I released him.

…sounds much nicer than ‘abandon’.
I’d prefer it if the option was something like ‘return to wild’ or ‘release’.
Abandon seems cold & heartless.

There are two different situations where the question of growth may have different answers:

Wild animals spawn and despawn, I never managed to watch the same young one long enough to notice it grow. But the hatched ones are more permanent and we can “study” them.

Yes. Take it back to its home world at least

Thanks for this thread, my friends.

This whole pets thing is reminding me of my favorite game ever: Creatures. You find/select and egg, put it in the incubator and in a few minutes out pops a baby “Norn”. OMG, so cuuuute!

Later you can gene slice (sort-of) the characteristics of two Norns and make a new kind of Norn. Or you could do what we called a “Wolf Run”, which was leaving the game on unattended overnight, to see what random genetic mutations created in the population. (Did I mention the Norn’s could breed with one another? So cute, They rubbed noses, made smooching noises and giggled, and later laid an egg.) Sometimes you came back in the morning to a completely empty world. Sometimes you got super smart colourful Norns. My favorite game of all time, well, a simulator actually. And it is still around.

Creatures is an artificial life (alife) video game series, created in the mid-1990s by English computer scientist Steve Grand whilst working for the Cambridge video games developer Millennium Interactive. Gameplay focuses on raising alien creatures known as Norns, teaching them to survive, helping them explore their world, defending them against other species, and breeding them. Words can be taught to creatures by a learning computer (for verbs) or by repeating the name of the object while the c...

I’m hoping to clear some space-time to jump back in to NMS to play with the pets. Looks like fun!

Hey, it turns out an adopted wild beastie does grow the same as a hatched one does.
I adopted young ‘Hatsilly’ (proc.gen name) & later a beetle thingy.
Here I am a week or more later & Hatsilly is ‘Mature’ & about twice the size he started as.
I’m not sure when it happened because I was distracted breeding beetle things via the sequencer.
Quite happy that he gets to grow up too

That is great news! --At least I think it is, from the point of view of someone who has yet to play this update. 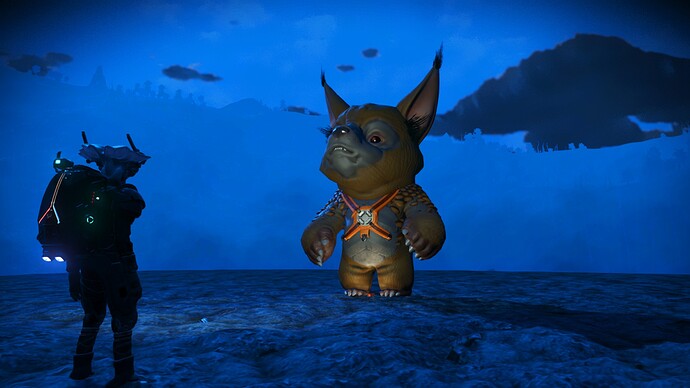 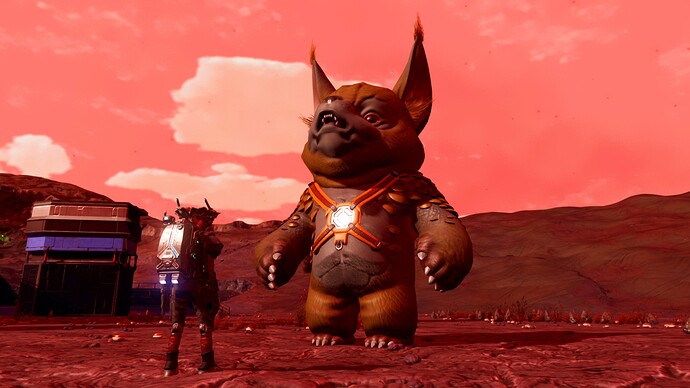 Here’s my pup! Acts very dog like and reminds me of my Great Pyrenees (crossed with a Narwhal

). Traits are gentle & independent (same as a pyr!) 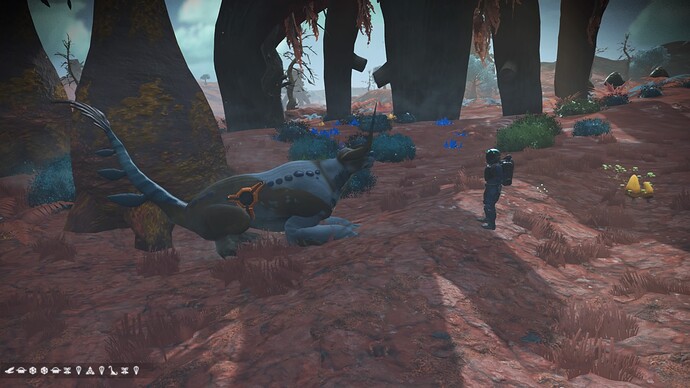 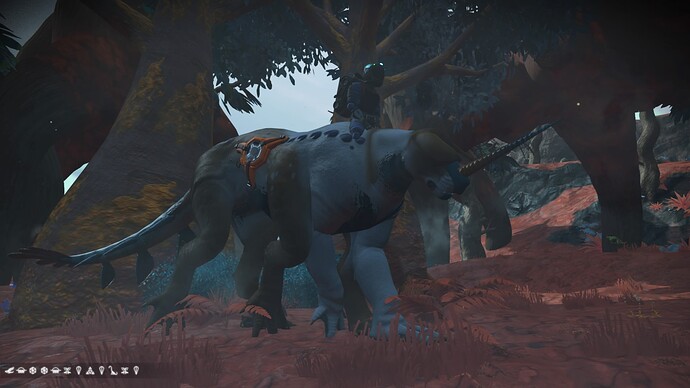 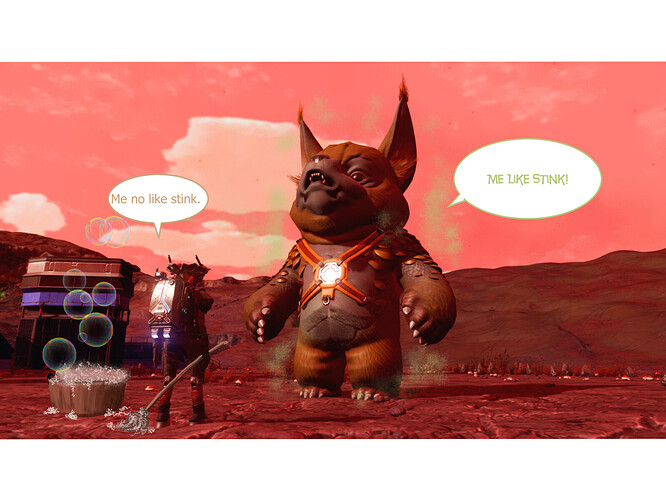 A post was merged into an existing topic: Companions / Pets

Please continue in the topic below:

It appears we do not yet have a topic for our beloved Companions or Pets, so have one! Screenshots, discussion, questions, breeding tips, anything related! Previous topic can be found here: https://forums.atlas-65.com/t/companions-update-3-2/7402