Hi all, not sure if this has been brought up yet, but was digging a bit deeper into Arnaud Lacours’ profile on the ware site. Did a search for his company name Philo Jeux. Found www.philojeux.com and did a translate to English. He is passionate about philosophy and new technology (ware). The first game created and written by him was Tablets Mnemosyne. Mnemosyne is the goddess of memory in Greek mythology.
Jeux in English is Games, so I did a search for Philo Games and found this YouTube clip - YouTube true it was published in 2015 but it seemed relevant with his outlook, but what caught me was at 1m46s into the video a random image appears which looks a lot like the art work from NMS. 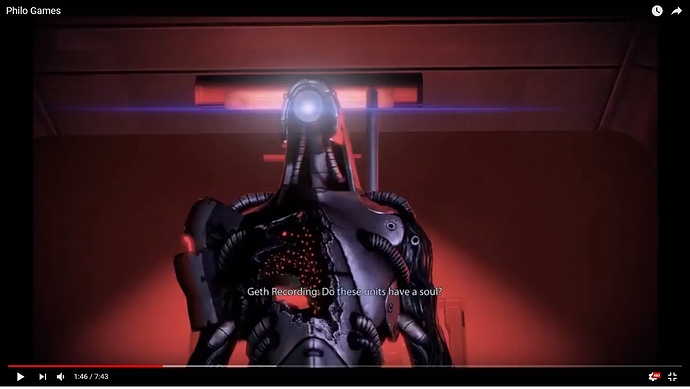 Seems cool none the less

Wow! Thats what I would imagine a sentinel with a humanoid frame would look like…

I think that image is from mass effect.

The Geth is an Artificial Intelligence within the Mass Effect trilogy. They were created by an alien non-human race, and treated as slave-workers until the robots gained sentience and rebelled against their former masters. They are the main adversary to the PC in Mass Effect 1, but in ME2 and 3 a more nuanced picture of the Geth emerges, and you can actually have them on your team.

But yes, this image belongs to Mass Effect and has nothing to do with No Man’s Sky…

Edit: For anyone who is interested in the combination of RPGs and Sci-Fi, but not interested in dystopianism, this is one of the best games out there… Mass Effect 1 is like 11 years old by now, so the graphics are accordingly, but ME2 and ME3 play fantastically and they still feel very relevant today!

Wow! This is pretty creepy.