I have watched so many PSAs from the 50’s. Even throwing a picnic blanket over your family was recommended. Realistically, it was just a way to help people feel in control. A way to abate fear. Give people something to do. Try to maintain order…which ain’t gonna happen no matter what.

a way to help people feel in control.

Maybe also related to people wanting to believe in weird “cures” for diseases.

A little radiation might do some of us some good…there was a case of a man in Hiroshima that had his cancer put into remission by the radiation…he was lucky. If I remember correctly, he was also a Dr so this allowed him to attend to others who were not so lucky.

That video makes Fall Out 4 seem like a high level tutorial.
I’m a bit lost for words right now…

Nothing will withstand a direct hit with modern nuclear weaapons. Even the NORAD bunker at Cheyenne Mountain (under 2,000 feet of granite) is only designed to survive a blast more than 2 miles away. Any nearer, and you’re toast.

Away from the immediate blast area, the main dangers in the short term are heat flash, flying glass, and falling masonry. That’s where the “cover yourself with a coat, and crouch under your desk” part comes in.

The heat flash is incredibly intense, but it’s also very short - fractions of a second. It will cause horrific burns to exposed skin, but it’s so brief that it can be stopped by a sheet of brown paper. Hence “get down, and cover yourself with a coat”.

If a whole building collapses onto you, then there’s very little that will save you. However, hiding under a desk, or under the stairs (staircases often survive an explosion) could save you from flying glass, and falling bricks and timber.

The fallout is not an immediate concern. That doesn’t arrive until hours or days later.

The civil defence advice that was given did not attempt to save those caught in the central blast area. They were written off. The advice sought to minimise injuries to people in surrounding areas.

Embrace it! Serve the Atom! We are all children of Atom.

Better store up some Rad Away.

If you are near enough to see the intense flash, the gamma radiation that came with that will kill you. It’s only a matter of time.

Some of the Army training and briefings I got were downright scary and depressing.

I posted a video in another thread, The House in the Middle. The really scary part of that video is when they bomb explodes, you can see these little black dots and streaks burning thru the film. I mean, they have to be radioactive particles. Then the guys go in after the blast to check out how the houses faired and you can still see little black dots and streaks although much less but still…

I have watched a lot of old films and never seen these dots and streaks in any other film…
Having grown up during the 3 Mile Island and Chernobyl incidents, just hearing a geiger counter beep in a game is enough to send me screaming

So basically the only people who are going to survive will be the preppers (mainly in the USA) and the swiss.

The evolution of their offspring many millennia from now will be interesting.

I’ve said it before but I honestly believe anyone threatening nuclear war and simultaneously making plans for the future isn’t serious about their threats. Could be wrong tho!

The evolution of their offspring many millennia from now will be interesting.

Diverging greatly from the topic, but there’s a persuasive archaeological argument that this has already happened.

There is convincing evidence that both the late bronze age cultures, and the iron age “Celtic” cultures, that dominated much of Europe, had their base of operations (if not their place of origin), in the area that is now Switzerland.

If you have European ancestry, chances are, you’re already the result of Swiss survivors. 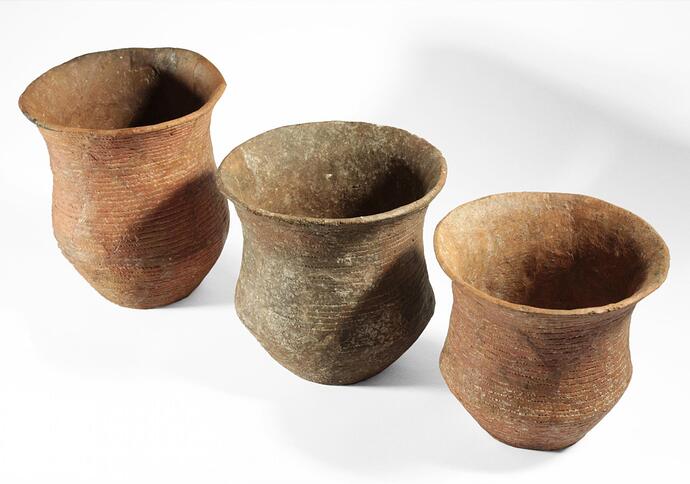 The Amesbury Archer grave is of a man dating to around 2,300BC and was discovered three miles from Stonehenge by Wessex Archaeology staff in 2002. His grave was the richest ever found dating from the early Bronze Age found in Britain. He was found... 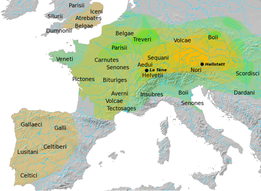 The La Tène culture (/ləˈtɛn/; French pronunciation: ​[la tɛn]) was a European Iron Age culture. It developed and flourished during the late Iron Age (from about 450 BC to the Roman conquest in the 1st century BC), succeeding the early Iron Age Hallstatt culture without any definite cultural break, under considerable Mediterranean influence from the Greeks in pre-Roman Gaul, the Etruscans, and the Golasecca culture, but whose artistic style nevertheless did not depend on those Mediterranean La Tè...

Europeans and pretty much every other continent in the world, have groups of people who have survived for 1000s of years. Americans have been here for a scant 200 years and are already on the brink of self-destruction. So I am not so convinced we would survive any sort of massive destruction event.

There is convincing evidence that both the late bronze age cultures, and the iron age “Celtic” cultures, that dominated much of Europe, had their base of operations (if not their place of origin), in the area that is now Switzerland.

Huh, that’s the first time I heard about that. I mean, yes, the Helvetians were a celtic tribe, and Rumantsch (a language native and unique to the eastern parts of switzerland) is the closest still living language to Gaulish, but there’s not much question that the Gauls, not the Helvetians, were the dominant celtic force in central europe.

Europeans and pretty much every other continent in the world, have groups of people who have survived for 1000s of years. Americans have been here for a scant 200 years and are already on the brink of self-destruction.

The trick is that self-destruction is not the end. It is a fact that the united states are actually pretty old when it comes to polities. Most modern european polities are actually younger. Even if the united states were to disintegrate, it would by no means mean the end of civilisation in north america. Merely a transition. Those usually hurt, but not a single century passes without europe (much less Asia) having a couple of them. All in all, in the historic context, it must be said that the USA has been an extremely stable polity, who’se structure inspired many of the structures of modern-day european polities (most of all, Switzerland).

there’s not much question that the Gauls, not the Helvetians, were the dominant celtic force in central europe.

The reality is a lot more complicated than that. Depends on what time period you’re talking about, whether there ever were any “Celts”, and whose definition of “Gauls” you’re using - the Roman one, or that of the Galli themselves. But I suspect that’s a subject for a new thread. 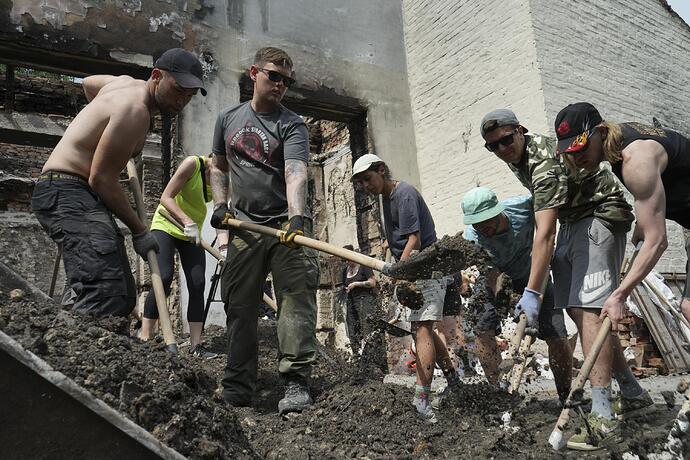 YAHIDNE, Ukraine (AP) — In a village in northern Ukraine that was devastated by Russian occupation only months ago, a techno party is in full swing. In a bombed-out building, more than 200 young people have found a novel way to help rebuild their... 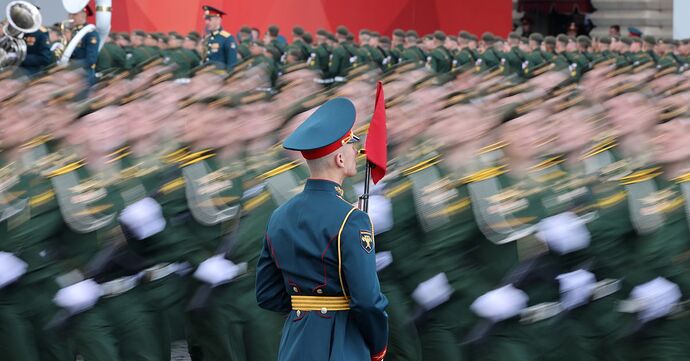 President Vladimir Putin on Wednesday ordered Russia's first mobilisation since World War Two and backed a plan to annex swathes of Ukraine, warning the West he was not bluffing when he said he'd be ready to use nuclear weapons to defend Russia.

Yeah its absolutely insane which is what makes it so dangerous

Unfortunately, with the leadership we have now - what leadership? - bad actors will take advantage. So for a couple of years at least, Russia, Iran and China are running the world. I had hoped that India would rise to more prominence on the world stage, but I guess taking up the mantle of a superpower isn’t that easy. And being China’s neighbor doesn’t help with that.

Poor Earth, but I saw it coming. It’s going to take a Special Event to fix this. 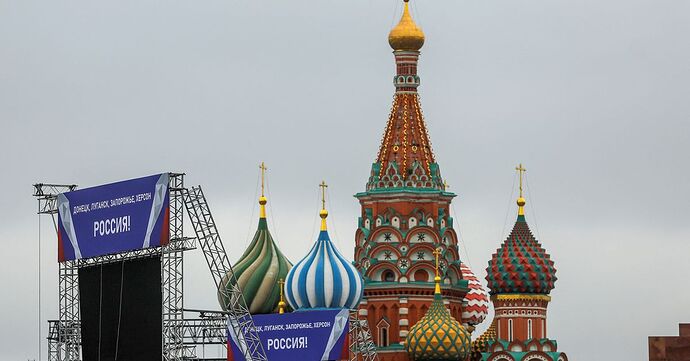 Putin to proclaim rule over seized Ukrainian land in speech

President Vladimir Putin will sign documents on Friday proclaiming Russia's annexation of four Ukrainian regions, as Moscow rushes to lock in territorial claims that the Ukrainian army is threatening to reverse on the battlefield.